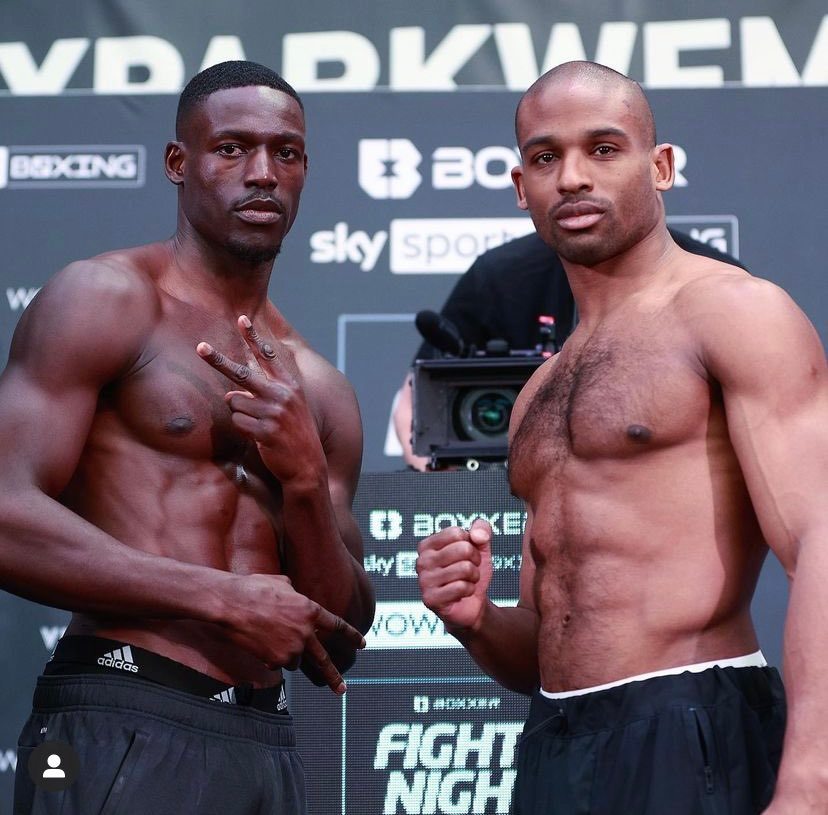 Following the withdrawals of Fabio Turchi and Mikael Lawal earlier in the month, undefeated cruiserweights Richard Riakporhe (13-0-0) and Deion Jumah (14-0-0) will now come face to face with each other this Saturday night at the Wembley Arena, live on Sky Sports. Credit to BOXXER and Ben Shalom for acting so swiftly to put the pair together after what might have been a disastrous turn of events for the promotion, the domestic clash arguably more intriguing than the originally scheduled main event.

Riakporhe stopped Olanrewaju Durodola inside five rounds back in November to climb further up the rankings with major governing bodies as he gears towards a potential world title shot over the next eighteen months. Jumah meanwhile has struggled to land the big domestic names thus far in his career, a major opportunity falling on his lap this weekend to make a real statement and throw himself into the mix at the top of a deep division at British and European level. The bout is scheduled to go twelve rounds, though it would be no surprise if the fight ends inside the distance with both men’s resume proving the power each man possesses, Riakporhe having stopped nine of his thirteen opponents while Jumah boasts seven from fourteen.

Dan Azeez (15-0-0) fights for the first time since picking up the British Light-Heavyweight title after a superb performance against Hosea Burton in November, stopping the Newcastle man inside seven rounds. The win also earned Azeez an exclusive long-term deal with Sky Sports and BOXXER, providing a huge platform for the thirty-two-year-old to develop as he chases big domestic showdowns with the likes of Anthony Yarde, Joshua Buatsi and Callum Smith. Originally slated to face Scarborough’s Matthew Tinker, a man who beat Azeez in the amateurs, Azeez will now face Reece Cartwright (23-2-0) over ten rounds after Tinker was forced to withdraw in his first fight under the BOXXER and Sky Sports banner.

The vacant English welterweight title will be on the line as Kent’s Louis Greene (13-2-0) and Derby’s Harry Scarff (10-2-0) come head-to-head over ten rounds. Greene is a career welterweight, having fought at 147lbs for the entirety of his professional career, while Scarff moves down to a more natural weight for the first time as a pro having competed at 154lbs for all twelve of his professional contests so far.

Further down the card, Chris Kongo (12-1-0) returns for the first time since his sole professional defeat to Michael McKinson one year ago. Kongo has always struggled to find the major domestic clashes needed to progress as a professional, with the Dominican Republic’s Kelvin Dotel (14-6-0) in the away corner this Saturday. Promising lightweight prospect Adam Azim (3-0-0) looks to secure his fourth professional win in as many fights at 135lbs against Conner Marsden (5-1-0), Azim surely one of the most promising developing talents British boxing has to offer. Brother Hassan Azim (2-0-0) also looks to maintain his undefeated record at 147lbs versus Bulgaria’s Yoncho Markov (4-3-0), with both of their previous outings coming on the undercard of Amir Khan versus Kell Brook in Manchester last month, Adam securing a third-round stoppage while Hassan cruised to a comfortable points win over four rounds.

Tokyo 2020 Olympian Caroline Dubois (1-0-0) also walks for the second time in the professional code after an impressive debut at the beginning of February, facing Hungarian Martina Horgasz (5-8-0) over six two-minute rounds. At 154lbs, Joe Pigford (18-0-0) of Southampton takes on David Ezequiel Romero (12-14-1) over six, Pigford having won all but one of his professional fights inside the distance so far. Super-middleweight Zak Chelli (10-1-1) also returns over six rounds.

Three debutants are also scheduled to appear at Wembley Arena, with Jimmy Lee at 130lbs, Shannon Ryan at super-flyweight and Jeamie Tshikeva at heavyweight.