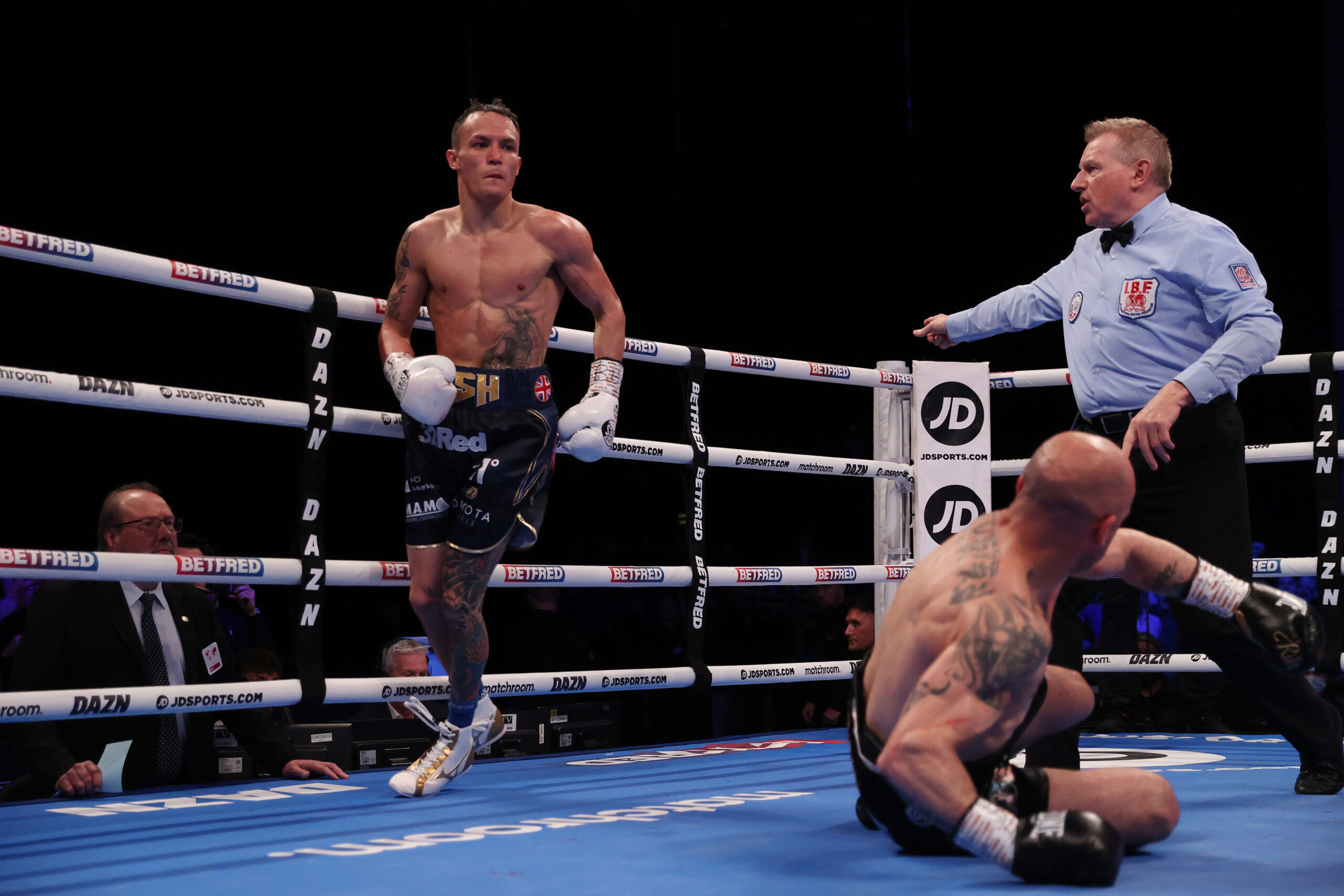 Kicking off DAZN’s ‘Before the Bell’ segment was super-lightweight prospect Calum French, who scored a third-round stoppage of Angelo Turco. French was unable to miss with the straight left-hand out of the southpaw stance, with Turco in survival mode from the second round onwards thanks to the bludgeoning blows handed to him by the former European amateur bronze medallist whose new record stands at 2-0-0. Referee Mark Lyson adjudged Mali Wright a 39-38 winner in his light-heavyweight rematch with Luis Palmer over four rounds, Wright starting well with the straight right before Palmer grew into the fight in a close second and then a definitive third for the away man. Wright was also on the way to losing the fourth before big blows caught Palmer in the final thirty seconds, clubbing him with hooks which rocked the head right back, seemingly enough to edge him the fight on the cards. Wright’s new record stands at 1-0-1, with Palmer’s at 0-1-1 respectively, the two fighters no doubt taking a lot from their two clashes. Yorkshire’s super-lightweight prospect Conor O’Regan cruised to a 60-54 points victory over Jakub Laskowski, O’Regan’s amateur pedigree clear to see out of the southpaw stance, dominant with the jab and straight left throughout.

The first bout of the main broadcast saw Australian and Tokyo 2020 Olympian Skye Nicolson’s dominant performance over the tough Bec Connolly, the former running out a comfortable 60-54 winner over six rounds with a superb performance. There’s no doubting that the 130lb division has another big player in Nicolson, who moved to 2-0-0 with her second fight in under a month. Sheffield’s Dalton Smith scored his eighth stoppage in as many fights, Ray Moylette’s corner throwing in the towel in the tenth and final round whereby Smith scored two knockdowns, both coming from short left hooks on the inside which planted Moylette firmly on the seat of his trunks. The former Team GB man was dominant throughout, hardly losing a round, but was deducted two points in the seventh from a very low left uppercut landing far below Moylette’s beltline. Smith remained undeterred however and went on to win the rest of the bout, showing superb shot selection and razor sharp accuracy with the jab.

Yorkshire’s Maxi Hughes comfortably outpointed Ryan Walsh at 135lbs to defend his IBO title, the latter stepping up two weight divisions for the bout which proved to be a key factor, the greater size and reach of Hughes a pivotal advantage across the twelve rounds. The home man looked sharp with the southpaw jab throughout and regularly landed with the straight left down the middle, stopping Walsh in his tracks as he sought to close the distance and bare down on Hughes. The champion’s record now stands at 25-5-2, compared to Walsh’s 27-4-2, this bout possibly the latter’s last in a long, successful career.

A new IBF bantamweight champion was crowned in the chief support, with another Australian in Ebanie Bridges outpointing Maria Cecilia Roman of Argentina by scores of 100-91, who knows what judge Don Trella was watching, and 97-93 twice on the cards after ten frantic rounds. Bridges’ volume was superb throughout, demonstrating a hard, clubbing right hand in particular as she regularly rocked the Argentine’s chin. Roman had her moments in what at times was a scrappy and untidy fight, but it did not take away from an entertaining spectacle which was enjoyed by the local Leeds fans. Many are critical of the shorter rounds in the female code, rightly so particularly at the higher level, but there can be no doubting that the faster pace they provide has its upsides. Bridges took the opportunity to hit back at her critics in the post-fight interview, exclaiming “can I f***ing fight or what? F*** you to those who say I can’t fight”. The Australian could now look towards a rematch with Britain’s Shannon Courtenay who was witnessing the fight unfold from ringside after Courtenay edged the original encounter on points in a brilliant, action-packed fight just under twelve months ago. Bridges’ new record now stands at 8-1-0, compared to Roman’s 16-6-1.

The headlining bout of the evening saw the rematch between Spain’s Kiko Martinez and local hero Josh Warrington, the Spaniard’s IBF title which he picked up against Kid Galahad with a jaw-dropping comeback victory last November on the line. Warrington won the first fight on points back in 2017, and there was never much clamour for a second run until Martinez personally called for it to Warrington’s promoter Eddie Hearn, seemingly wanting to right a wrong he felt had been unfairly forced upon him.

It was Warrington however who looked as though he had a point to prove, both men knowing defeat could spell the end of their career at the top level, with the Leeds man clubbing Martinez with hard hooks as the Spaniard’s back was to the ropes before a punishing right hand over the top sent Martinez down in the opening round. Blood immediately trickled down the Spaniard’s face and it was a disastrous start for the defending champion. The first round turned out to be a sign of what was to come however, Warrington continuing his domination over the forthcoming rounds, regularly rocking Martinez with hard barrages of hooks, the ‘Leeds Warrior’ looking energised for the first time since his first professional defeat to Mauricio Lara. Warrington showed another side to his game as the fight developed, stopping the champion in his tracks with a ramrod jab at the start of the fifth, the Englishman boxing brilliantly so far. Another cut opened to the forehead of Martinez in the sixth, replays showing an accidental head clash to be the cause. The challenger had won every round and Martinez was put out of his misery the round after. Martinez initially landed a solid right hand before a barrage of punishing hooks sent him sprawling to the ropes with more hard lefts and rights crashing against the thirty-five-year-old’s skull with no response coming back. Eventually, referee Marcus McDonnell had no choice but to step in and wave the fight off, confirming Josh Warrington as a two-time featherweight champion of the world. The home crowd roared and Warrington dropped to his knees overwhelmed by the emotion after the most difficult eighteen months of his career.

The victory however now means a line can be drawn under the post-COVID era of Warrington, the defeat to Lara a memory of the past as a mega domestic unification with Nottingham’s Leigh Wood now looks to be on the cards. Warrington paid tribute to his adoring and loyal Leeds fans who were predictably raucous throughout the evening as they again witnessed another huge chapter in the book that is the career of the Leeds Warrior.