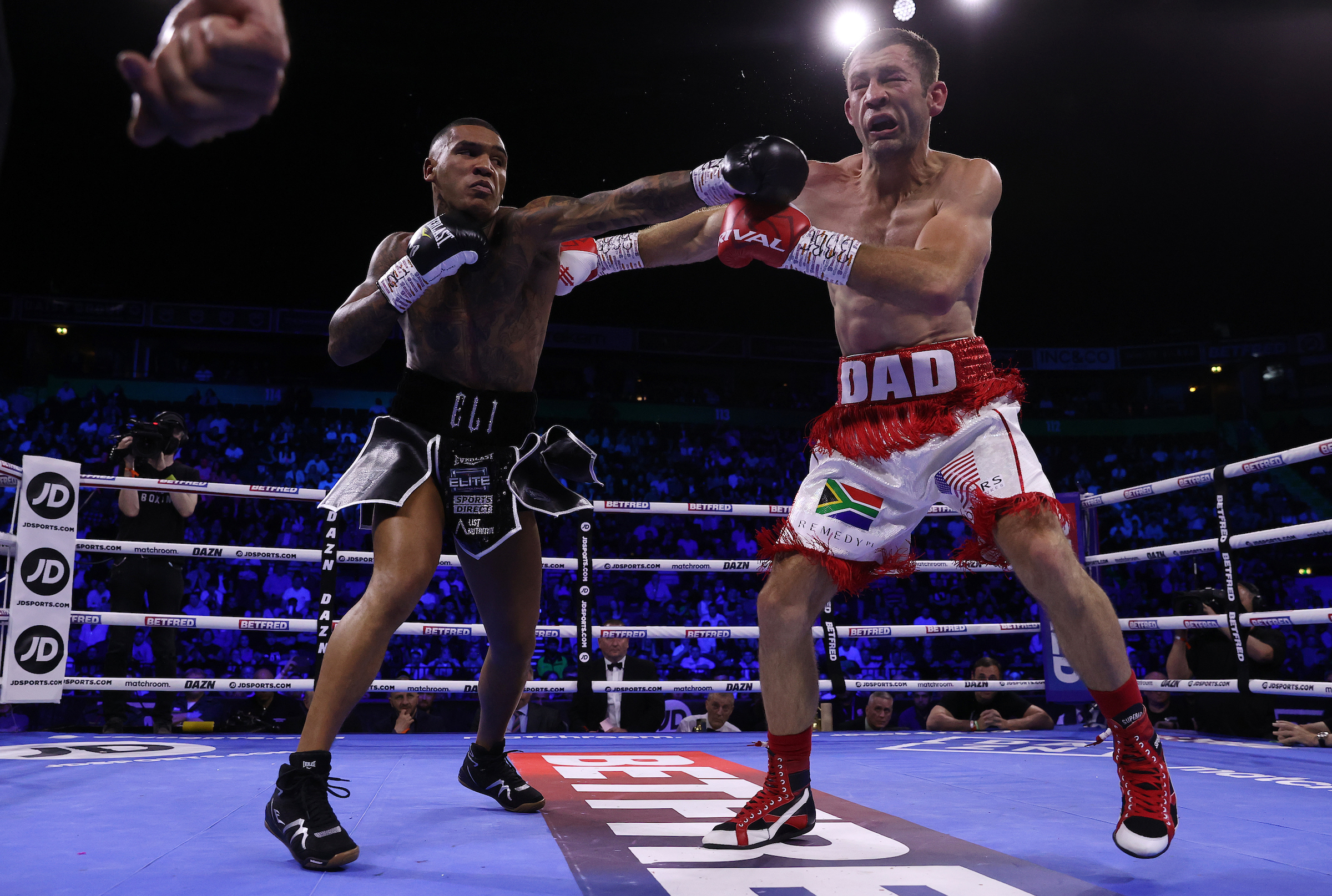 Conor Benn secured his twenty-first victory in as many outings on Saturday night at Manchester Arena as he annihilated South Africa’s Chris van Heerden inside two rounds.

Benn was focused and determined as he entered the ring donning a black silk with the word ‘destroyer’ emblazoned on the back, a moniker he soon lived up to in the forthcoming moments. The first round saw an energised Benn looking to pin down van Heerden behind a stiff jab and clubbing straight backhand, the thirty-four-year-old sporadically landing with short hooks of his own on the inside.. The second round however saw the Brit ruthlessly dispose of his man, a huge straight right-hand crashing against the chin of Van Heerden with his back to the ropes, forcing the latter’s legs to dip. Benn immediately pounced on him with clubbing hooks which rocked his man again, a right eventually bundling the South African to the canvas. Referee Steve Gray reached a count of five before waving the contest off, Van Heerden hunched onto his knees and showing no sign of a potential recovery.

The victory has now cleared the way for what promoter Eddie Hearn has described as huge plans for the twenty-five-year-old welterweight, Benn himself mentioning the likes of Kell Brook, Keith Thurman as well as Danny and Mikey Garcia post-fight. The momentum gathered by Benn during the last eighteen months has been incredible, and any concerns over his potential early on in his career have been quelled, the sky the limit as to how far ‘the Destroyer’ can really go.

The chief support of the evening saw an entertaining rematch between cruiserweights Chris Billam-Smith and Tommy McCarthy, with the former’s Commonwealth and European titles on the line. Last time out, ‘CBS’ edged a close fight on the cards at Matchroom HQ, with Team McCarthy left aggrieved after feeling they had done enough to secure the victory. Fast-forward to Saturday night and Bournemouth’s Billam-Smith quashed any doubts with an emphatic eighth-round knockout. The fight was back-and-forth, both men hurt but enjoying periods of success while fighting at a blistering pace. The pivotal moment came a third into the eighth with McCarthy’s back to the ropes, their foreheads an inch apart as both swung on the inside. Billam-Smith let two hooks go which met the chin of McCarthy, jolting the Irishman’s head back before another big right again landed clean. McCarthy looked hurt and sought to slip the oncoming blows, but more straight rights eventually bundled the Irish cruiser to the floor. McCarthy was hurt and lay on his side, his eyes meeting those of his corner as the count drew longer before referee Jon Llona Fernandez waved the fight off at the count of nine. After some took issue with CBS’ being awarded the win first time around, there can be zero doubts this time in what was a punishing performance from the Bournemouth man.

Detroit’s super-featherweight champion Alycia Baumgardner also ran out over ten rounds in Manchester in a comfortable unanimous points victory over a game but limited Edith Matthysse, the American winning every round on all three judge’s scorecards. The fight marked the first successful defence of Baumgardner’s WBC crown she tore away from Terri Harper in November as she now looks for a mega unification clash with Mikaela Mayer.

Further down the card, Manchester’s undefeated cruiserweight Jordan Thompson ensured his unblemished record remained intact with another dominating performance, stopping Mariano Angel Gudino inside two rounds with a big right uppercut. Jack Cullen also ran out over eight rounds, winning all with a dominant performance against Vladimir Belujsky, his first since defeat for the European title in December. Campbell Hatton fought for the first time in front of a crowd at the Manchester Arena, winning a six-round contest versus Ezequiel Gregores. Hatton’s no doubt still raw but the progress made since his debut is clear for all to see. Luke Evans of Salford could only draw over six against Miguel Cesario Antin in his twelfth outing, while James Metcalf acquired ample preparation for his upcoming clash with Kerman Lejarraga for the European title at 154lbs with a comfortable fifth-round stoppage of Evgenii Vazem.