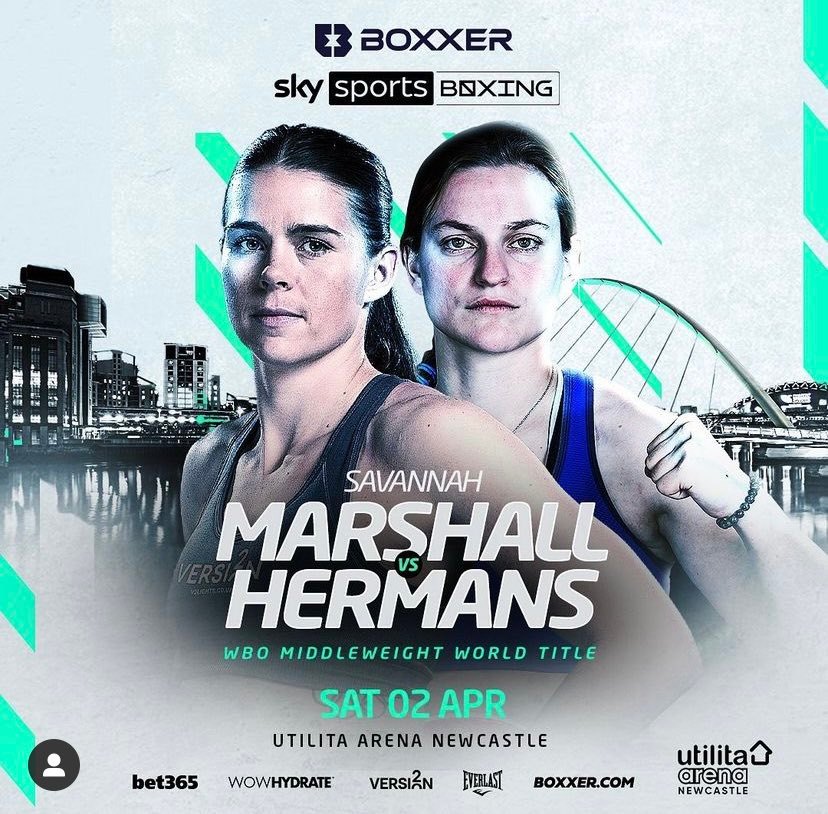 Marshall looks to move past Hermans before mega Shields clash

WBO middleweight champion of the world Savannah Marshall (11-0-0) returns to Newcastle’s Utilita Arena on Saturday in what she will hope to be the third successful defence of her world title before a huge undisputed clash with bitter rival Claressa Shields in the summer. Belgium’s Femke Hermans (12-3-0), who lost to Shields back in 2018, stands in the Marshall’s way as she looks to tear up the script and open the door to huge showdowns of her own at 160lbs.

Marshall is one of the few female fighters in the female code who does not appear to be held back by the shorter two-minute rounds, already stopping nine of her eleven opponents in the professional code. One of the most exciting female fighters around and certainly among the pound-for-pound best in the world, Marshall has come on leaps and bounds in recent years, and also seems to have developed outside of the ring with her glittering personality really shining through. The exchange between the Brit and Shields in February following the American’s successful UK debut in Cardiff acts as a case in point, the pair exchanging in an entertaining verbal spat as the anticipation for a potential clash grows more and more. Marshall must however deal with the opponent currently in front of her however in Femke Hermans, and will be buoyed by the wise head of Peter Fury in her corner, a man who has seen everything professional boxing has to offer.

The undercard on Saturday features a welterweight clash between Albania’s popular welterweight Florian Marku (10-0-1) and Wales’ Chris Jenkins (23-4-3). Marku will hope to climb another rung on the ladder as he continues his own professional development, while Jenkins seeks another victory as he too harbours ambitions of edging towards the upper echelon of the welterweight division following victory against Julius Indongo last time out. Middleweight Brad Rea (12-0-0) scored a highlight-reel knockout last time out on the Khan verus Brook undercard in February, blowing away Craig McCarthy inside a round with a hellacious uppercut, and will hope to continue his momentum this weekend against Namibia’s Lukas Ndafoluma (20-4-0) over eight rounds. Zak Chelli (10-1-1) runs out against Jack Kilgannon (11-0-0) at super-middleweight, while local fighter April Hunter (4-1-0) returns following her first professional defeat to Kirsty Bavington in October. The Czech Republic’s Ester Konecna (1-14-1) will be in the opposing corner. Former Team GB Boxer from Merseyside Chloe Watson (1-0-0) is set to walk for the second time as a professional at super-flyweight.