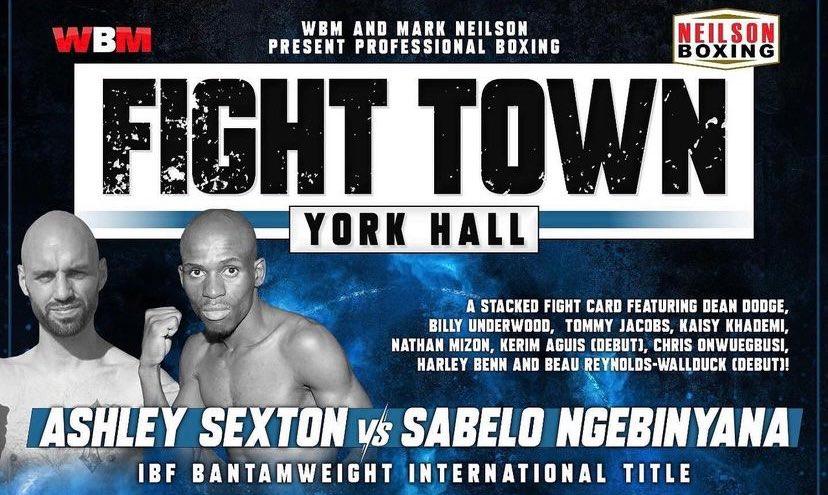 Bethnal Green’s York Hall served up yet another plate of Friday night boxing last night, headlined by Edmonton’s Ashley Sexton coming head-to-head with South Africa’s Sabelo Ngebinyana in an IBF-sanctioned bantamweight clash. It was the latter who prevailed as victor on the night however, with Ngebinyana halting the Brit in the fifth of ten scheduled rounds after sending Sexton to the canvas in the previous round. The South African had predominantly fought in his home country in most of his eighteen bouts heading into Friday night, but the new surroundings turned out to have little impact as he attained the fourteenth win of his career and his eleventh coming inside the distance.

Watford’s Reece Belotti also appeared at the prestigious York Hall, picking up his first win since suffering three consecutive defeats in his last three fights with a seventh round technical knockout of Dean Dodge to pickup the Southern Area super-featherweight title. Super-welterweight prospect Nathan Mizon moved to 5-0-0 as a professional with a comfortable six-round points victory over Brayan Mairena, with Mizon winning every round on referee Sean McAvoy’s scorecard upon the conclusion of the contest. Billy Underwood also picked up his fifth victory in as many contests at 160lbs with a second-round stoppage of Tommy Jacobs, both men undefeated heading into Friday night. Jacobs’ record now stands at 2-1-0. At super-lightweight, Luke Liddiard made his pro debut with a 39-37 points victory across four rounds versus experienced journeyman Lee Hallett. Chris Onwuegbusi attained his second professional win in as many fights with a four-round points victory against Vasif Mamedov, while Beau Reynolds cruised to a fourth-round technical stoppage of Sebastian Wojtan on their professional debut at 154lbs.