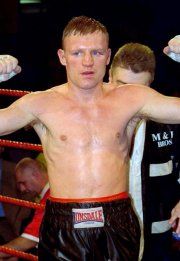 “I’m a nobody. I’m nothing, Yet five and a half thousand people turned up to watch me.” – Shea Neary

Shea “Shamrock Express” Neary was born James Patrick Neary in May 1968 in Kensington, Liverpool.
He started boxing at 15 when a couple of his friends invited him to the gym and Shea was mesmerised from the first day.
His first gym was the Imperial, under the guidance of the late Tony Silvano where a young impressionable Shea learned his trade.
He fought 21 times as an amateur, losing only three times before turning professional in 1992 at the age of 24.
His first pro fight was at Everton Park Sports Centre in Liverpool against co-debutant Simon Ford, Shea won in the first round and would go on to win another 15 straight contests, 11 of them by knockout.
In late 1996, with a superb 16-0 (12 KO’S) record, Shea took on the experienced American, Darryl Tyson (47-9-1) for the vacant WBU Light-Welterweight crown at the arena where he had fought his first pro fight.
Tyson had previously held the American Title and lost a unanimous decision for the WBC Lightweight Title four years earlier against Miguel Angel Gonzalez.
Shea boxed expertly in the fight of his life and out-pointed the man from Washington in a one sided 12 round points victory to crown himself World Champion on home soil.
In the following months, Shea’s promoter John Hyland signed a deal with ITV to broadcast Neary’s WBU Title fights, the only boxing deal ITV had at the time and that meant Shea would get great exposure across the British Isles.
A Successful third round knockout defence followed against Jeremiah Malinga before one of the biggest nights in Liverpool boxing history took place in March 1998.
Shea would defend his title against another scouser, Andy Holligan (27-2-0) in a purpose built arena that covered Liverpool’s Stanley Park and would hold 5,500 fans.
The Fight was built up as the “Nark in the Park” and with no other arena big enough, John Hyland and his brother Stephen, along with business partner Neil Munro decided to build their own arena for the clash.
In a gruelling battle lasting 17 and half minutes, Holligan had looked close to victory before Shea came back with a barrage on hooks and Holligan slumped to one knee late in the sixth.

He asked the ref to let him carry on after acknowledging the quality of the shots, but Shea got straight back to work and the gripping contest was stopped by referee Darryl Ribbink.

For Holligan, a former British Champion, who had previously lost to the great Julio Cesar Chavez for the WBC Tiltle, it proved to be his final bout.
But for Shea, it was his greatest accomplishment in a career that would never again reach the heights of that night in Stanley Park.
After the fight Shea said famously , “I’m a nobody. I’m nothing, Yet five and a half thousand people turned up to watch me.”
Shea held onto his title for another 2 years, beating Naas Scheepers, Juan Villareal and another American, Mike Griffiths before his biggest test, which would come in March 2000.
Shea was matched up with a little known former IBF challenger from Massachusetts in the United States, named “Irish” Mickey Ward.
Ward, who was pre-Arturo Gatti at the time flew over to take on Shea at the Olympia in London.
Shea came out blazing but was soon subdued by Ward’s powerful body shots and uppercuts, eventually being worn down by Ward and suffered a brutal TKO in the eighth round to lose the title he had held for four years.

Shea came back four months later to take a points win away from Alan Bosworth, then eight months after the defeat to Mickey Ward, he took on Eamonn Magee for the Commonwealth Light-Welterweight Title.

The fight took place on Magee’s home soil in Belfast, Northen Ireland and after 12 pulsating rounds, Shea would come home disappointed after a narrow (116-114) points defeat to the rugged champion.
It proved to be Shea’s last fight at the age of 32, but Shea will forever be remembered as a tough champion who fought with his heart and always gave his all.
Shea has recently (2010) been seen in the corner of another Light-Welterweight, Wallasey fighter Steve Williams as he challenged Lenny Daws for the British Title and looks to have taken to training fighters for the foreseeable future.
Questions

How would you describe your fight style Shea?

I would say a pressure fighter
Who Influenced you as a young boxer?
My first trainer, the late Tony Silvano
Who is the toughest opponent you have faced?
Has to be Mickey Ward, a true warrior. (right)
Toughest part of being a boxer?
Everything!

Who do you wish you had fought?

What fight do people ask you about most?
The “Nark in the Park” against Andy Hollingan
Best fight you have seen?
Got to be the Rumble in the Jungle (Ali v Foreman – right)
Dream Fight? who v who?
Ali v Tyson
Childhood Hero?
Julio Cesar Chavez (right)
Favorite all time boxer, World and British?
All time World would be Marciano (right)
and all time British would be John Conteh
Favorite current fighter World and British?
World – Pacquiao, British – Cleverly
What do you do when you are not Boxing?
Go to work
Which British Boxers should we look out for?
Tony Bellew, Nick McDonald and Steve Williams

I just had the hunger to be a champion
Favourite Boxing Venue?
Madison Square Garden
What would you change in Boxing?
The fact that some fighters seem to get decisions just because they are on home soil.
Last book you read?
The top 100 poems
Favorite films?
Pulp Fiction and Lock, Stock and two Smoking Barrells
Who would play you in a movie of your life?
Daniel Craig

Which 3 people would you be stranded on a desert island with?

Chris Evans, Angelina Jolie and Gordon Ramsey
Tell us something we don’t know about you Shea?
I Still Diet like a boxer
Quick Fire Questions:
Red or Blue?
Blue
Hatton or Witter?
Hatton
Barrera or Morales?
Barrera
Paquiao or Mayweather?
Mayweather
Jab or Hook?
Both
York Hall or Albert Hall?
York Hall (right)
Head or Body?
Both
WBC or WBU?
It Doesn’t matter as long as its on HBO!
European or British Title?
British
Favourite City?
Liverpool
One thing you cant live without?
Ambition
Favourite Quote?
If you can walk with kings and keep your virtue and never lose the common touch – Rudyard Kipling (right)
Best gift you have ever been given?
Love of my family
What does the future hold for Shea Neary?
God only Knows.