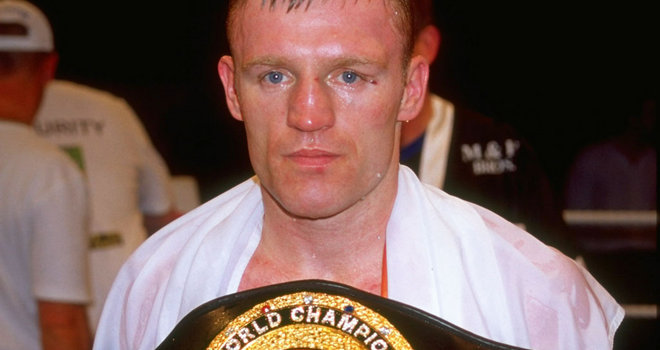 Shea did not hang around long after the epic duel with Andy Holligan. His next defence was against the South African Naas Scheepers. I said at the time to Neil Munro, John Hyland and Steve Hyland, ‘This could well be Shea’s hardest bout, and no disrespect to Holligan, Darryl Tyson or any other of Shea Neary’s opponents’.

Not many people ever mention this bout regarding Shea’s career. However I know one knowledgeable man, ‘Big’ Joe Egan who along with myself said that it was one of the best bouts he ever witnessed.

Why did I mention to Munro/Hyland, Shea’s promoters, that this could be Shea’s hardest bout? There is alot more to boxing than two men climbing in a ring.

Cultures are involved alongside environment, background, upbringing, desire for recognition and the sacred hempen square where man is stripped and trained to the minute can bring all this to fruition.

Also you look at the make up of a boxer and also his trainer. Naas Scheepers was no ordinary white South African, this man had boxed many times in the townships – a very hard school indeed and for him to do so proved he was not just fearless but also no duck egg with his dukes and a southpaw to boot.

Another plus factor was his trainer Harold Volbrecht. Harold had been a top world class welter who was far from his best when his title shot against Mark Breland. I spoke to Harold about great South Africans of the past Jake Tuli, Joe N’Gidi, Janni Botes ‘The Germinston Wildcat’, Willie Toweel alongside Vic his brother and that wonderful featherweight Sexton Mabwena. We got on well and I found Naas Scheepers good company. He told me he did a bit of lion taming, that rung a bell as I remember a Spanish bullfighter Louis Folledo coming over to box world class Brian Curvis at short notice and giving him fits and beating Jimmy McGrail.

Also Naas Scheepers had that air of a man who had no fear and confidence in his own ability and his trainer Harold Volbrecht – I was impressed.

Since I first met Shea Neary we hit it off and the bond of friendship has grown. Shea was always wary about southpaws and accepted it as an occupational hazard.

About three weeks prior to the bout Shea paid me a visit. We spoke about Naas Scheepers, I said ‘Shea, this man is one ring cutie, he’s an aggressive southpaw. Whatever you do don’t move to his left, keep your guard tight’. I won’t say anymore only that an old Chester boxer Charlie Nilstone, ex North of England light welter champ, ex sparring partner to Freddy Welsh who had a great record against southpaws, told me something and I divulged it to Shea. In no way am I saying that I had anything to do with

the success of Shea Nary’s career. I has passed information on prior over the cut he received from Terry Southerland and his trainer George Schofield said ‘Tommy if you have any ideas or knowledge on anything, let us know’. For the record, Shea never got cut again. My friend Terry Churchill can vouch for what I divulged regarding the cut. George said that what I had said to Shea warranted thought.

Well what a night’s boxing took place at Widnes with Colin Dunne retaining his WBU lightweight title. When Shea Neary and Naas Scheepers entered the ring there were gasps around the ringside, both were in peak condition, fit to fight for a kingdom.

There was no feeling out period and for round after round both gave an exhibition of boxing combination punching beyond belief. Every inch of the canvas was fought for as if their very life depended on it. Shea Neary was up for it, he had to be. Naas Scheepers was world class that night, I wrote that he was the best southpaw seen in a British ring since Marvin Hagler.

The last round, the twelfth was as fast and eye catching as the first. Though Shea Neary won a unanimous verdict each round was close. After the bout I spoke to Naas and Harold Volbrecht and said what a wonderful bout Naas had put up. Never again was Naas ever to reach that form. However, in my book he gave his all in the ring and he also fought Shea on Shea’s greatest night.

Shea had another defence that year against Argentina’s Juan Carlos Villarreal. This bout was marred by the Argentine’s spoiling tactics plus his problem with his boxing boots. Needless to say Shea won handily enough against a man who had a winning recordand had som good scalps on his record.

That night will always remain in my memory as that was the night that that wonderful Irish boxer and gentleman and dual World champion signed my grandson’s autograph book after a certain boxer who had come a long way from early days in Llangollen, Nr Wrexham, refused to but Steve Collins showed his greatness and compassion and turned a little boys upset to smiles, thanks Steve you made a pal for life in young Tom Dix.

I will be coming to the end of the bouts of Shea’s career in the next couple of weeks, what a wonderful time we had. Only the other week we were talking about old times with his son – undefeated light middle Jay Metcalfe and Shea’s words were ‘We were all struggling but we had some laughs and fun’. We certainly did.