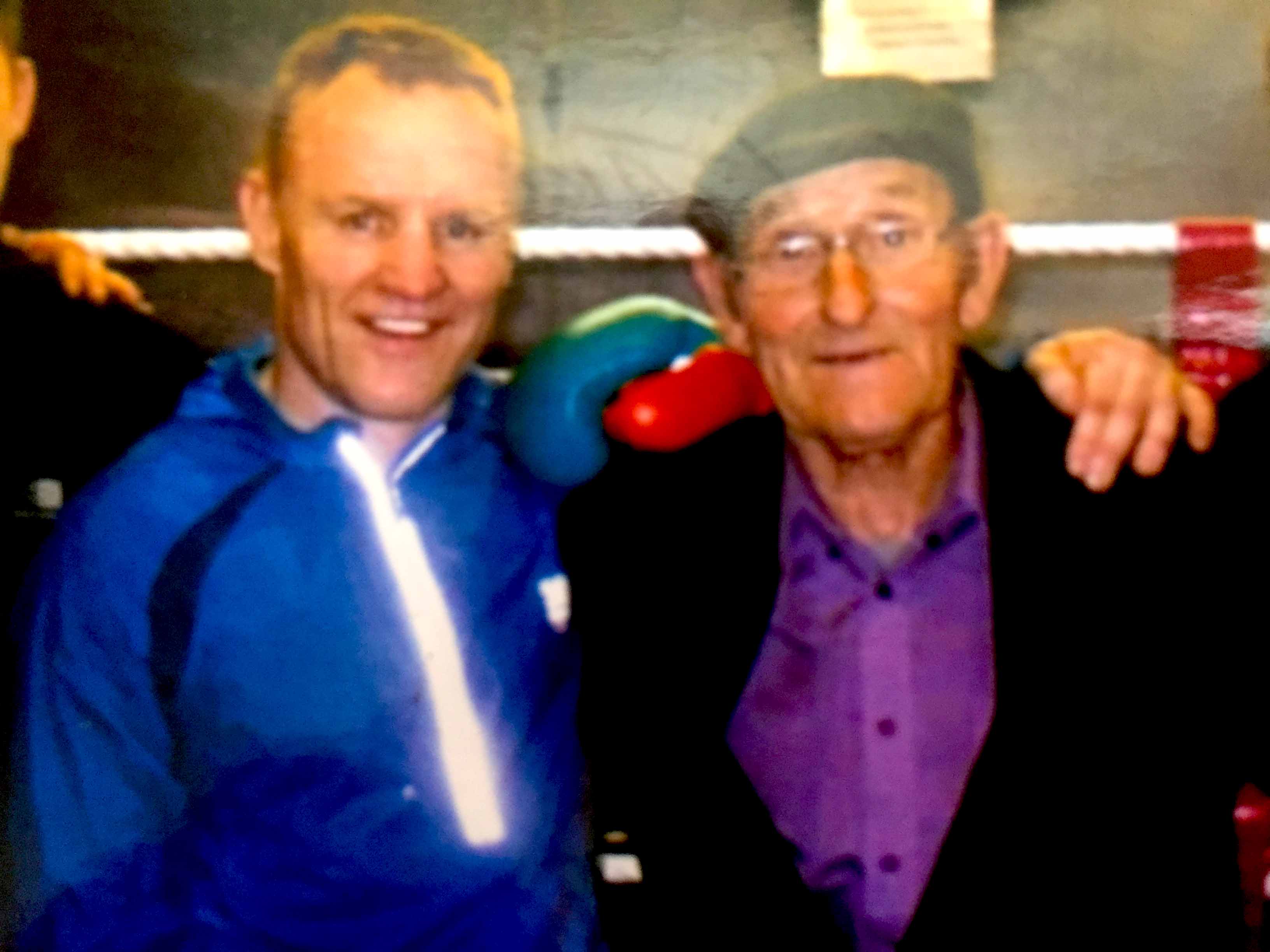 After the Terry Sutherland bout John Hyland was definitely out to make a statement on the boxing scene. At this particular time the World sanctioning bodies were under scrutiny (as usual), accusations were being levelled at the WBO, the IBF was being looked at and a new body had been set up by John Robinson and an American lawyer, it was called the WBU. At the beginning the BBB of C refused to recosgnise or sanction WBU bouts. Munro / Hyland took legal action and the BBB of C backed down.

The scene was set for Shea Neary to contest the WBU’s first title bout in England. His foe was that formidable American Darryl Tyson. In 57 bouts he’d fought the top men with just nine losses, some disputed to say the least. As an amateur he lost a disputed verdict to the great Pernell Whittaker, this man was class. For all that, at the press conference one man asked what he had done, I rose to my feet and put the man in the picture-it wasn’t what he’d done it was what he had not done . Afterwards Darryl Tyson and his trainer thanked me, his trainer said ‘You’re old school, Tommy Dix’.

The bout itself took place at Everton Park, for weeks the atmosphere was growing day by day, the anticipation was really something. Shea did his early preparation under George Schofield and George Snr with his great pal Charlie Payne as one of his sparring partners. Later he’d go to Kirkby with Charles Atkinson. The whole show was sold out well before the date, we had two coach loads from Chester, it was carnival time.

Shea Neary, ‘the Shamrock Express’, had definitely caught the imagination of the people and they identified themselves with him. What a night it was, the atmosphere was electric and both Shea and Daryl were trained to the minute.

After the introductions you could have heard a pin drop, the bell went and the noise was deafening. Those boys were definitely not for feeling each other out. Tyson was showing the smarts you learn in those tough downtown gyms but Shea was matching him and so the first three rounds went at a fast clip with both boys really up for it. Then in the fourth Tyson upped the pace, backed Shea against the ropes and they exchanged jabs and hooks, Shea landed a cracking right to floor Tyson.

Then it became apparent that Shea had damaged his right hand. Then, for all to see, Shea Neary put on a classy display of boxing to overcome the injury to earn a unanimous points verdict over a worthy adversary. However, it was quite a while before Shea could box again because of his hand injury.

His first defence was against the tough South African from the townships, Jeremiah Malinga. Shea dominated proceedings from the start in scoring a third-round KO. However once more Shea’s right hand was injured in the process. It was 12 months before Shea defended his title again, against the formidable World Class local idol Andy Holligan. The build up to this bout was unbelievable, with both boys having an army of supporters. It was soon clear that no stadium in Liverpool was big enough, so what did the promotional team of Neil Munro and Hyland do? They hired a giant circus tent and it was erected at Stanley Park, the tent seated 6500 people, needless to say both army of fans put their money where their mouth was and the show was sold out in jig time.

At the press conference both boys conducted themselves with the utmost dignity and respect for each other. When asked how he thought the bout would go Shea said ‘I’m confident and so is Andy, in a bout anything can happen’. I was so proud to be in the company of such wonderful boxers and gentlemen.

It was said that there was a turf war in Liverpool at the time and a truce had been called. Even so there was a check by police prior to entering the circus tent. The atmosphere that had been increasing by the weeks, could be cut by a knife by the time both boys were taking the ref’s instructions. A deathly hush fell over the capacity crowd, when the bell went it was as if a thunderstorm had struck.

The opening round was not a feeling out one with Andy catching Shea with a jab and right cross plus landing a cracking left hook to the body (his caling card), Shea was not idle and scored with good punches to head and body.

The next two rounds Shea definitely dominated, however just at the end of the round Andy landed a couple of his trademark body punches to show he was far from finished.

Both went at each other, Shea got in first only for Andy to steam right back. Every inch of canvas was fought as if their lives depended upon it. Quit was not in those boys’ vocabulary nor dictionary, Andy seemed to edge the round.

The sixth and final round of this 12 round contest will forever be indellible in anyone’s memory who was present.

The fighters traded tremendous punches, leads, hooks, crosses, uppercuts in the ring’s centre. Andy caught Shea with a wicked combination and had him in a corner when once again Shea snatched victory from the jaws of defeat. Shea spun out of the corner and landed a straight left, left hook to the body and right cross and Holligan was floored.

Andy got up at nine, my heart went out to Andy, as though he had no chance he went to meet Shea head on. Shea just met him with a fusilade of punches and the referee had no option but to stop the brave challenge of Andy Holligan who was glorious in defeat.

PS: I would like to thank Mr. Eddie Hearn and Matchroom Boxing for putting on such a wonderful promotion at Liverpool Echo Arena on 15th October 2016, also I would like to thank Mr. John McDonald for the wonderful signed glove he gave me and not forgetting Johnny Nelson, Tony Bellew, Derry Matthews and Masher Dodd for signing it. It was a very good night and show to be at.