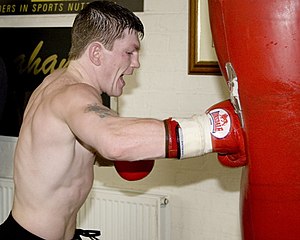 RICKY Hatton has spelled out his desire to create an empire away from the ring as he continues to contemplate his future.

That spells good news for Heywood ace Mark Thompson ahead of his British Welterweight title eliminator against Kevin McIntyre in Altrincham on Friday.
Hatton is clear on his motives for building a business career and those motives might provide some reassurance for the fans who were concerned about seeing him hit the deck during his ill-fated fight against Manny Pacquiao at the MGM Grand in Las Vegas in May.
“I have made my mark in boxing and I have been very fortunate to gain a good following,” said Hatton. “Due to my popularity I have started to make a business of it.
“Although I’ve not made my mind up about whether to continue fighting, after becoming a champion, the next thing to do would be to make a champion and to give them some of the success I have enjoyed.”
The Hatton empire so far comprises Hatton Promotions, where he is billed as Richard Hatton, and has several British and Commonwealth champions fighting under his banner. Prospects include Thompson, Hatton’s younger brother Matthew and Scott Quigg.
What will be just as refreshing as a canvas drenching with a bucket of water will be the terms that Hatton promises to offer his fighters.
“The job they’ve done has made me sure that I can go into promoting and make a good job of it,” he said. “I’ve worked with lots of promoters over the years and I’ve learned a lot of good things and a lot bad. When people fight for titles, promoters have generally taken the majority of the money.
“I’m a firm believer that the fighters should make the most money. I want to make a bit of money from promoting, that’s why I’ve gone into it. But I’m happy making a little bit and letting the boxer have the majority. I’ve already made my money through boxing so I’m happy having a smaller piece of the pie. That’s what will set me apart from other promoters.”
Courtesy of The Heywood Advertiser

Norton told Hatton TV that he respects the challenger but believes the fight will follow a similar pattern with Dolan starting strongly but fading in the latter stages.

Whilst Sunderland’s David Dolan says he is confident that he can overturn last year’s result and take the British & Commonwealth Cruiserweight belts from Rob Norton in Altrincham.
He told Hatton TV,at the weigh-in, that he is now more experienced and wiser as he attempts to win the titles. last year’s fight was his first over 12 rounds but he says he has now come to terms with the demands of the full Championship distance.

Mark Thompson could earn himself a shot at the British welterweight title if he can overcome former champion Kevin McIntyre in a ten round eliminator. This excellent match will take place on Hatton Promotions’ first show of 2010 at the Altrincham Leisure Centre on January 15.
They Heywood puncher has put together an impressive 11-fight win streak since first bursting onto the scene following his thrilling but ultimately gallant loss to South Africa’s Vincent Vuma 18 months ago. At 28 and after 23 fights (22 wins, 1 defeat), Thompson has more than served his apprenticeship and will be looking to finally win a title of significance in 2010.
Opponent Kevin McIntyre has endured a similarly frustrating time. Harshly stripped after being unable to defend his British crown against Kell Brook due to injury, McIntyre was blitzed in a round by Brook when trying to regain the Lonsdale belt in November 2008 against the Sheffield star.
The Scot returned to the ring last February with a second round stoppage victory over Jay Morris. McIntyre was once again bemoaning his bad luck though in October when his contest with the unbeaten Brett Flournoy was suddenly aborted in round 2. The fight was subsequently declared a no contest after ringside medics were called away to attend to Jason Rushton who had collapsed in the dressing room following his stoppage loss to Brian Rose.
Thompson and McIntyre is a difficult fight to call. One can envisage Thompson bulldozing the slow-starting McIntyre to defeat early, as proved to be the case when Kevin was stopped in the opening round by Kell Brook and Nigel Wright. Thompson does have a tendency to load up with every shot however and if he fails to get McIntyre out of there the crafty southpaw could settle into a rhythm and outbox a fading Thompson down the stretch.
The British and Commonwealth cruiserweight title rematch between Robert Norton and David Dolan tops the bill. This Hatton Promotions bill will also feature the explosive rematch between middleweight punchers Paul Samuels and Cello Renda – two fights I have previously discussed in an earlier article (see below).
If that isn’t enough, the Hatton’s also stage an English lightweight title battle between Dezzi Higginson and Martin Gethin and will showcase a host of North West talent on a packed undercard. Full details below.
Venue:
Altrincham Leisure Centre
Oakfield Road
Altrincham
WA15 8EW
0161 926 3255
Doors: 6.00pm
First Fight: 6.30 tbc
Live on Sky Sports