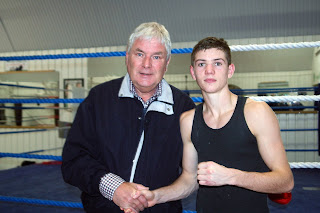 Photo by: Gianluca (Rio) Di Caro
As part of his preparations for the 2012 London Olympics European Bantamweight Champion Luke Campbell has left behind the cold, and the snow currently covering much of the UK, for the much warmer climes of Los Angeles to spend some time training with ‘Trainer of the Year’ Freddie Roach at his famous Wild Card Gym.

Speaking at Rooney’s Boxing Gym in London, where he dropped by to see his former Team GB head coach Terry Edwards MBE before heading to Heathrow for the transatlantic flight, uke said. “It’s going to be a once in the lifetime experience. LA’s a great place, but going to Freddie Roach’s gym will be something extra special. Freddie is the best coach pro coach in the world. Hopefully I’ll learn something new, something different to take back with us.

It’s going to be a great learning experience. He has so many champions in his gym. It’ll be interesting to train alongside them, hopefully I’ll pick up a few of the techniques they’re doing.”

Luke, a two-time ABA Champion, made history by becoming the first British amateur boxer to secure a European title for 47 years, was crowned the Bantamweight (54kg) Champion at the European Championships in Liverpool in November 2008.

His path to glory was not an easy one. In the quarterfinal he faced and defeated the Moldovan Olympic bronze medal winner, Veaceslav Gojan, before progressing to the final after an excellent 4-1 points victory over Germany’s Denis Makarov. The quietly spoken 21 year old, from Hull, then secured the Bantamweight (54kg) title by defeating the highly experienced Bulgarian Detelin Dalakliev. Even more impressive was that this was his event debut.