Matthew Hatton looks towards a rematch with N’Dou after his latest win in Stoke, plus undercard

Matthew Hatton was being touted as a possible opponent for Floyd Mayweather, that was if the American decided to fight in the UK this year, Hatton was apparently on the Mayweather short list.

‘Sugar’ Shane Mosley stepped from the list to sign to fight ‘Money’ Mayweather and Hatton’s dream fight for now is still a dream.

So back to reality and back to Stoke’s Fenton Manor Sports Complex, the same venue where Hatton was very unlucky not to win the IBO welterweight crown last November 2009, when he fought to a controversial draw with Lovemore N’Dou, a fight in which the 28-year-old Hatton was unfortunate not to win.
In Stoke on the Hatton promotions bill, the Manchester boxer, now being trained by renound Manchester coach Bob Shannon since the departure of Lee Beard, made light work of Georgian journey man Mikheil Khutsishvili stopping him in round five.
We have seen Khutsishvili here before, when last year he fought another Hatton promotions fighter the impressive Martin Murray, who stopped him in round four.
The fight didn’t tell us anything about Hatton that we didn’t already know, but this fight was always going to be a foregone conclusion with no threat, and a fight to get him back on track in 2010 and chase the rematch with N’Dou.
N’Dou the South African born Australian and IBO champion did offer Hatton a rematch after there first drawn clash, but at the time insisted on it taking place in South Africa.
With Hatton not fancying a trip to South Africa to try and win the title again, having been on the end of a decision he felt was the wrong, by the judges in Stoke, doesn’t want to try his chances over there.
N’Dou now looks like he will defend against Hatton again, in a rematch not in South Africa, but on the undercard of Hatton’s brother Ricky’s comeback fight this summer.

Unbeaten St Helen’s middleweight prospect Martin Murray beat another Georgian fighter  the tough Shavla Jomardashvilli, who coming into the fight with an impressive record of 25 wins, 19 by KO and only 1 defeat, proved a good test for Murray taking him the distance, Murray won the fight 58-56 over 6 rounds.

BritishBoxers.co.uk tip Murray as one to watch for the future, we are very impressed with him and see him going on to win a British championship.

Under the guidance of underated trainer Oliver Harrison, Murray can achieve his ambition.
Special feature on Martin Murray. 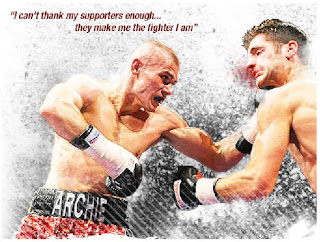 Martin Murray is an exciting, unbeaten middleweight boxer from St Helens, currently ranked 5th by BoxRec in the UK, and a great British prospect. Training under Oliver Harrison, most people recognise him as the winner of the middleweight Prizefighter competition, where he had arguably the toughest draw resulting in an epic battle in the final against the ‘big banger’ Cello Renda.
Martin has tremendous support as a boxer, and always brings an ‘energetic’ crowd with him to his fights which creates an electric atmosphere at any venue. He is truly grateful for the support he gets, and this website is a resource for fans to find out more information about Martin, and to keep up to date with the latest news and events.  Find out more >

Anthony Crolla moved closer to a title shot with his third win in a row, beating serial loser Birmingham’s Jason Nesbitt on points.
The 23-year-old, who is under the wing of trainer of the year 2009 Joe Gallagher, has rebuilt his career since losing a British title eliminator to Gary Sykes last May. (Joe Gallagher and Anthony Crolla, pictured left)
Since that setback, Crolla seems to have taken his boxing more seriously, now realising he just doesn’t have to turn up to win, and has got well on the road to reaching his obvious potential with impressive victories over Jon Baguley, Michael Brodie and now Nesbitt, which could see him get a shot at the British title.
Crolla hopes to face the winner of Sykes and Ricky Burns, who fight for the vacant British crown next month, although beating Nesbitt doesn’t tell us anything we don’t know about him already, he is still unbeaten and ready to take on the best in Britain.
“I feel like I’m improving all the time,” he said. “I want to be in the title mix. I feel the super-featherweight division is really opening up at the moment and there are a lot of routes I can take.
“I’ve never felt better or more confident in the ring. I believe I’m ready to take my chance.”
Crolla told the Manchester Evening News.
Crolla was eyeing a shot at stablemate Scott Lawton and the European crown, his hopes were dashed as the Stoke fighter was blasted away by Leva Kirakosyan.
Lawton was always a surprise challenger for the vacant title and looked out of his depth against his 36-year-old opponent.
The 33-year-old Lawton who was knocked out by both Amir Khan and John Murray at lightweight before stepping down a division, was knocked down in each of the first three rounds before the fight was called to a halt. read more