Greatest British Boxers of all time

British BoxersApril 26, 2010
LATEST BOXING NEWS11 Comments14 min read
In a poll we recently ran, Joe Calzaghe won the votes for the best pound for pound boxer to come from these shores.
Do you agree? or do you believe we have forgotten just how good Ted “Kid” Lewis was? Bert Randolph Sugar, in his authoritative book, The 100 Greatest Boxers of All Time, ranked Lewis at number 33, ahead of such fighters as “Gentleman Jim” Corbett, Jake LaMotta, Sugar Ray Leonard, and Georges Carpentier!

During his career Ted “Kid” Lewis   (left) won 9 titles at weights ranging from featherweight to middleweight. Ted Lewis was born in London 24 Oct 1894 and was to start boxing professionally at the age of 14.
In 1914, after winning the British (October 1913) and the European (February 1914) featherweight titles at the Premierland boxing hall on Back Church Lane, East London, he went to Australia where he had five 20 round contests all within a period of 63 days. At that time he was the youngest ever holder of the British Featherweight title. 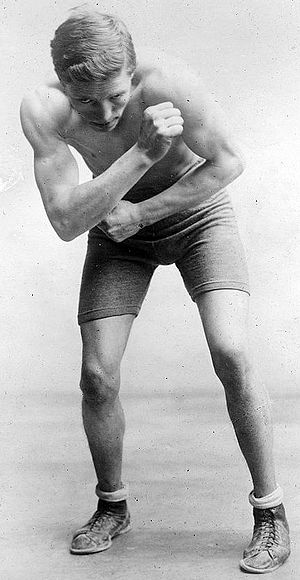 He then moved onto the United States, as a welterweight, and during the course of the next 5 years he was to win the World title twice, have 10 championship bouts and in total won 26 fights, lost 5, drawn 2 and also chalk up 63 no-decision contests – the majority of which it was judged he won.
Mike Tyson former heavyweight champion and renowned boxing historian, said Ted “Kid Lewis” Lewis was “probably the greatest fighter to ever come out of Britain.” Lewis was elected to the International Boxing Hall of Fame in 1992.He finished his career with a record of 283 fights, won 215 (71 KOs), lost 44, drew 24, and conceded significant poundage to a great many of his opponents and also going into their back yards to do so.

Surely Lennox Lewis? he was an undisputed heavyweight champion who cleaned up the heavyweight division and defeated every man he ever faced? In 2009, in his first year of eligibility, Lewis was inducted into the International Boxing Hall of Fame.
With a career record of 41 Wins (32 knockouts, 7 decisions, 2 disqualifications), 2 Losses (2 knockouts), 1 Draw, including wins over his other modern day great rivals Evander Holyfield and Mike Tyson.

So here are three other fighters to consider when making your judgement on, just who is the greatest pound for pound boxer to come from the UK?
So we come to the present decade and Joe Calzaghe, the Italian Dragon, the Welsh Wizard who finished his career in Halcyon days, when defeating two of the all time greats Bernard Hopkins and Roy Jones Junior, which came on top of his master class showing, of pure boxing genius to batter America’s next top model in the mold of Mike Tyson, Jeff Lacey to really get the world to notice.
Joe Retired last year with an incredible record of 46 fights, 46 wins with 32 by knockout. He fought and beat the best he had put in front of him.
Calzaghe’s earliest scalp was a unanimous points victory over Chris Eubank, who is much more universally recognized boxer compared to Calzaghe. It says a lot about the dominance of America in the boxing world that it wasn’t until the destruction of the previously unbeaten and heavy favourite American Jeff Lacey that the American critics started to take notice, even though that was his 41st professional fight.
He was looked down upon because he had never fought outside of Europe. However he corrected this by travelling to America and beating heavy favourites and future hall of famers Bernard Hopkins and Roy Jones Jnr – who is widely viewed as one of the greatest boxers of the past decade. People may say that Jones was over the hill, but Calzaghe performed a boxing masterclass that shocked people in the States.
Throw in victories against the talented Mikkel Kessler and Peter Manfredo, and the evidence is there for all to see. Calzaghe must at the very lease go down as one of if not the best British boxer of all time, and surely as one of boxing’s best ever Super Middleweight Fighters.
special thanks to: DebateWise
Coming soon reviews on all the fighters featured in our list, – The greatest British Boxers Pound for Pound.

For more videos of the greatest British Boxers of all time visit our YouTube page.

WHO WAS The Best British Boxer ever ? Have we missed your favourite? Let us know please comment below…..