Jamie Moore Retires from the Ring 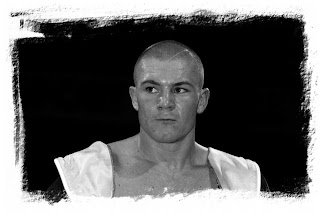 It is with sadness and relief that we report the retirement from the ring of former British, Commonwealth and European light-middleweight champion Jamie Moore, who has decided to call it a day and is to hang his gloves up for good following a shock defeat in his last fight, which was a comeback at middleweight, after his loss to Ryan Rhodes.
Salford man Moore who was the boxers boxer, a well-liked and respected pro by all in the game, fans and fight figures alike, issued the following statement:
“It is with great sadness and regret that I am announcing my retirement from the sport I love.
“In the last three years I have had three letters from the Boxing Board of Control declaring that there had been a slight change in my brain scan, although I was medically fit to box. After receiving the third letter recently I decided to seek an independent opinion and was advised that I should retire.
“That means is time to move on in life and pack away my gloves and gum shield for good.
“It has not been an easy decision to make, but after back-to-back defeats I realise the body can no longer do what it once could. I have also suffered a catalogue of injuries that became harder to shake off.
“I have a wonderful wife, two beautiful children and a lifetime ahead of me and cannot, and will not risk my long term health for my own personal reasons.
“Boxing will always be the most important thing in my life apart from my family and I will remain actively involved training professional boxers, and have also launched a high quality range of boxing equipment that I have designed, and also hope to get media opportunities.
“I have had a fantastic career and achieved more than I could have dreamed of by winning Irish, British, Commonwealth and European light-middleweight titles.
“I retire with my head held high knowing I contested some of the best fights ever witnessed in a British ring, and proud of the fact that, win or lose, fans were going to see an exciting fight.
“I would like to thank the people involved in my career who helped me achieve so much.
“My friend and manager Steve Wood, has been with me my whole career from my debut, and has not only helped in boxing but in all aspects of my personal life for which I will be eternally grateful.
“My friend and trainer Oliver Harrison who, since the Scott Dixon fight, has trained me and, without doubt, brought the best out in me and taught me to believe in myself again. He has passed on his vast knowledge of the sport on to me that I will hopefully pass on to others.
“I would like to thank all the promoters I have worked with, especially Barry Hearn, who gave me the opportunity to win my Lonsdale Belt and Frank Maloney, who along with Steve worked tirelessly to get me my European title challenge when it seemed everyone else was trying to stop me.
“A massive thanks to all my sponsors Ged Mason and Morsons, Ellesmere Properties, “B” Strong Windows and Len Funk at shoulderdoc.co.uk (story of my career!!!!)
“I would like to thank Kerry Kayes and CNP who worked with me for the last two years and who I only wish I would have had the privilege of working with for my entire career.
“May I also wish every opponent I have faced very best wishes for the future and my fingers are crossed that my friends Matthew Macklin and Ryan Rhodes will win world titles this year.
“A huge thanks to all my fans and supporters who have followed me my whole career. Without their support I could have lost fights that I have won but their screams and cheers pulled me through!
“I would like to give a special thanks to my mum and dad for bringing me up the right way and for making me the man I turned out to be, and to my beautiful wife Colleen, who has been on this incredible journey with me from start to finish. Without her help and support I would not achieved what I have today.
“And finally, I thank God for allowing me to be involved in such a wonderful sport and allowing me the opportunity to meet so many great people and achieve as much as I have done.
“It’s been a great ride.”
Jamie Moore vs Matthew Macklin for the British light-middleweight title, 2009 Fight of the Year
Jamie Moore was a big favorite with us, and his skills, bravery, heart and charisma will be missed. The straight talking Moore, who told it like it was, and wore his heart on his sleeve, was has graceful and honest in retirement as he had been throughout his ring career.
May we thank you Jamie for the years of excitement you have given us, you will be missed, and we wish you the best of luck in your life outside the ring, they’ll never be another Jamie Moore.
Moore the “Dirty Old Town” boxer will be remembered as one of the best British fighters never to win a world title, but he mapped his career the old fashioned way, and wasn’t going to go for some paper title just to boost his ego, Moore was full of substance and his fight with Matthew Macklin, 2009’s fight of the year (watch above) will go down as one of the best seen in a British ring.