Ian ‘Dappa’ Napa: I’m Ready To Get My Title Back 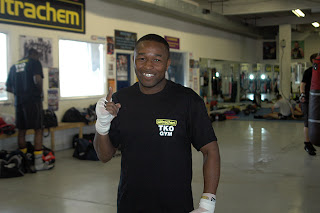 “I’m not letting anyone get in the way of my goals” Ian Nappa
Thursday – It’s a beautiful sunny day in London, but here we are indoors, at the Ultrachem TKO Gym in Canning Town, East London, to watch former two-time British and European Bantamweight Champion Ian ‘Dappa” Napa going through his final training session before setting off to Peterlee, Tyne & Wear, where he will face Darlington’s Stuart Hall for the vacant British Bantamweight title.
Napa’s coach, Brian Lawrence warns us,”Napa’s focused, he’s so focused now that a bomb could go off and he wouldn’t miss a beat. I tell you I wouldn’t want to be Stuart Hall. As far as Napa’s concerned Hall stands between him and the rematch with McDonnell”
So, if we didn’t know it already, Napa is still fuming over losing his British title by a controversial split decision to Jamie McDonnell in January. Mind you that loss didn’t just cost Napa the British title, it also cost him a European title shot. To add insult to injury, McDonnell side stepped a rematch with Napa, by vacating the British title, and then went on to defeat Frenchman Jerome Arnould for the European title.
This explained why Instead of the usual chirpy, ever smiling Ian Napa we are used to, we get to watch his alter ego train. This Ian Napa is a serious all business like character dedicated to finely honing his immense boxing skills by beating the living hell out a huge Ringside heavy bag. No one utters a word, It’s clear he wants to get his work done, so we wait patiently.
Finally the wait is over, Napa has finished training and has his weight checked by the BBBofC official, who like us waited patiently for him to finish his extended session. The first questions are the obvious ones such as “How’s training been” and “are you ready for Hall” etc to which he answered politely with the ubiquitous fighters reply “I’m looking forward to the fight, I can’t wait until I get in there and get the win.”
After about ten minutes of stock questions and answers it was mentioned that Hall had been making comments that Napa’s time was past, and that it was now his time. The Napa smile came back with a vengeance as he replied, “Talk is cheap, you know what I mean, when we’re in the ring it’ll be my fists that’ll be doing my talking. I’m not bothered about what he’s got to say. I know when I get in there I know what I’ve got to do. He’ll have to take what I give out. All I know is I’m ready to get my title back”
When it was pointed out that Napa´s slick defensive style, often likened to that of Floyd Mayweather, can make his fights hard to score for the ringside judges, Napa quickly responded by saying, “Some of the judges should wake up, take my last fight. I don’t know what fight they were watching but it wasn’t the one I was in. In the round replays, Sky TV couldn’t find one where McDonnell had landed anything. It’s crazy I’m always involved in decisions like these where I’m getting robbed.
Anyway that was then, this is now. My main aim now is to get back the British title first. That’ll get me back on track for the European title and then ultimately going for a World title. I’m not letting anyone get in the way of my goal, not Hall, not McDonnell, not anyone.”
Ian ‘Dappa’ Napa versus Stuart Hall for the vacant BBBofC British Bantamweight title will headline the Frank Maloney promoted event at the Peterlee Leisure Centre in Peterlee, Tyne and Wear on Friday, 4th June. and will be screened live on Sky Sports.
Gianluca (Rio) Di Caro