Stalker vs Evans III – “I’m coming to Wales to win.” says the Captain 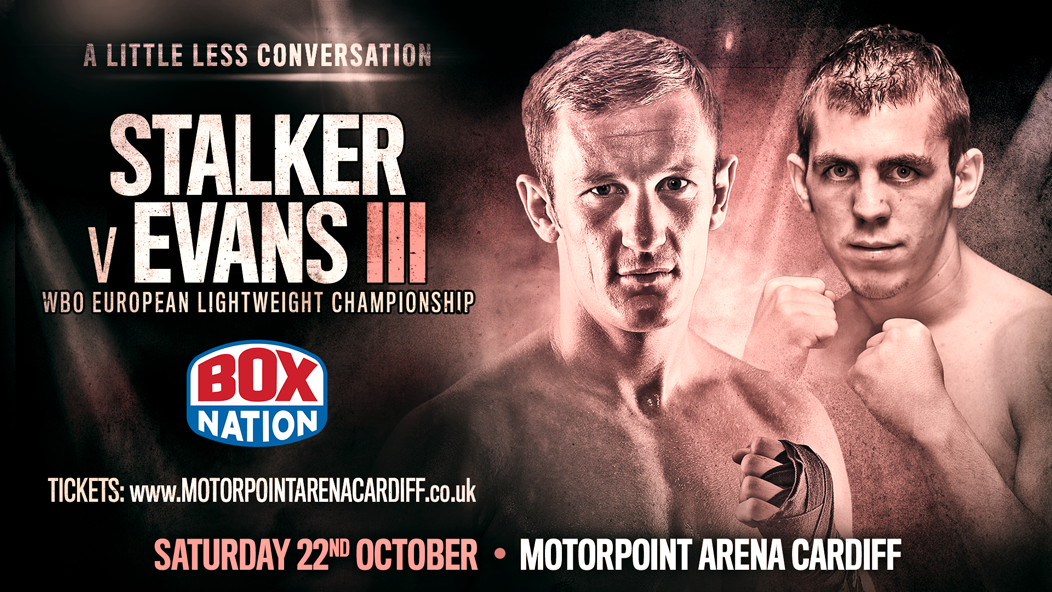 STALKER: “IF HE WANTS TO COME AND FIGHT I’LL MEET HIM IN THE MIDDLE OF THE RING”

Stalker, 11-1-3 2 KO’s, finally got his hands on the WBO European Lightweight crown after impressively outpointing Portugal’s Antonio Joao Bento at the Liverpool Echo Arena back in June. Prior to his win over Bento, Stalker had frustratingly drawn twice against Blackwood bruiser Evans.

Now the former Great Britain Olympic boxing team captain is looking to put an end to their rivalry once and for all.

“I’m taking the fight because I feel like I have come on a lot from our previous two fights and I want to put our rivalry to bed,” said Stalker. “I don’t even mind fighting him in Wales, he’ll have the crowd behind him but all of the pressure will be off me.

“I’ve boxed in a lot of intimidating atmospheres so fighting him in his back yard doesn’t faze me at all. I won a Commonwealth gold medal out in Delhi with 8,000 Indians screaming at me. I rise to the occasion and I would rather have it that way.”

Some felt Stalker was robbed of winning the Vacant WBO European strap after drawing with Evans at the Manchester Arena back in October. One judge scored the fight 97-93 in Stalker’s favour, while the other two scored the contest 94-96 and 95-95 respectively. The bout itself was an absolute war and Stalker is predicting another cracker for fight fans.

“I’m 100% focused on the fight and training has been going brilliantly. We have been in the gym for seven weeks already and I’m confident of going in there and getting the job done. I hope Craig is coming to fight me. I think he is going to try and outbox me and nick the rounds but that’s not happening!

“I’m coming to Wales to win and I’m going to win in better fashion than I did in the first fight. The outcome of the fight depends on what Craig wants to do. I think he is going to try and use his jab and edge me on points. If he wants to do that then I’m going to outbox him, if he wants to come and fight then I’ll meet him in the middle of the ring.”

Top of the bill sees Welsh hero Liam Williams make the second defence of his British Super-Welterweight belt against undefeated mandatory London challenger Ahmet Patterson in another potential fight of the year contender.

Tickets priced from £70 are available from: