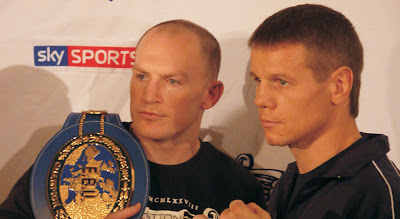 Matthew Hatton faces the toughest fight of his career when he defends his European welterweight crown against former world title challenger Ukrainian Yuriy Nuzhnenko on Friday Night at the Bolton Arena.
Nuzhnenko with an impressive record of 30 fights with just 1 defeat and 1 draw, the loss coming against Vyacheslav Senchenko last year for the WBA world welterweight title, losing on points. He is also the former WBA interim champion and will be a live opponent for Hatton in the first defence of the title he won by beating Italian Gianluca Branco in March.
“I’m 100% focused on Fridays fight, I’ve got a real tough job against Yuri who I’ve got alot of respect for, but I’m a firm believer you have to look forward to future fights, and whats around the corner, possible opponents, possible big fights, big pay days as motivation to get this fight won and to improve my focus on this fight, so I’m 100% focused on Friday, but these big opportunities around the corner it makes me more determined to produce the goods on Friday and that I will,” said Hatton.

Hatton who as admitted to being frustrated after alot of his previous fights because he new he was capable of much more has now joined Manchester’s Bob Shannon a trainer who as paid his dues in the game and is rated now as one of the best coaches in the business, a fitness fanatic who gets his fighters into the best possible shape with his runs in the hills surrounding Manchester and Hatton feels with the added help from Shannon he is fitter than he as ever been and is now moving to a new level as a fighter. 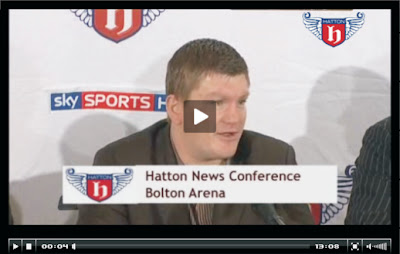 “I’ve worked with other coaches in the area so know what I was looking at, people might think it was a convenience thing because Bob was in our gym but I knew he was a very good trainer and needed someone for the fight in Stoke against Khutsishvili. We only had a few weeks for that fight but I enjoyed it and was learning new things.”
Hatton and  Nuzhnenko face off at the News Conference
The plan was to then have a full camp with Bob so that fighter and trainer could gel properly only for the Branco opportunity to fall into their lap, leaving the new team with no choice but to forge a bond in the pressure cooker environment of a European title fight.
“That fight was short notice, two-and-a-half weeks, so, again, it was a short training camp but I learned some more new things. I think that this longer training camp will let Bob do a lot more new things with me and you’ll see a big improvement again in this fight,” he added.
“People always spoke to me about Bob’s conditioning, I’m a fit fighter anyway – people have said negative things about me but there have never been complaints over my fitness – but Bob pushed me really hard and has taken it to another level.”
“I was a bit dubious (about the hill runs), it was new to me, but I’ve done two or three of them and I can feel the extra fitness. We’ve had time for this fight and I’ll have a good long training camp under my belt. It is hard work but I’m feeling the benefit,” said Hatton, who feels a win against Nuzhnenko can set him up for a world title shot.
“In boxing and in life you have to move forward, I’m European champion, am having my first defence and don’t want to move backwards after it so I’ll be looking for more title fights. Ricky said he’ll try to get Senchenko (the WBA welterweight champion) for me – he’ll deliver me a world title chance.
I’ve got a big incentive for this fight; I’ve got a young family to support and a mortgage, like most people. People sometimes forget that this isn’t Ricky Hatton this is Matthew Hatton and I have to pay my bills like everyone else. I am looking for the big fights and big titles.” he added.

The challenger Nuzhnenko looking calm and focused at the news conference and speaking through his interpreter made it clear that he was in no way ready to read the Hatton script.

“I have seen some of his fights on video with my trainer, nothing surprises me with him because it is nothing I haven’t seen before, he hasn’t got anything I haven’t already had to overcome in my career and with all my experience and skills that I’ve developed I’m sure that I will bring this European title back to the Ukraine,” said Nuzhnenko.
Watch Matthew Hatton v Yury Nuzhnenko on Sky Sports