Matthew Hatton vs Yuriy Nuzhnenko who you backing? Betting Tips

British BoxersJuly 16, 2010
LATEST BOXING NEWS0 Comments5 min read
The Sky Sports team present Friday Fight Night from Bolton this weekend where Mathew Hatton makes the first defence of his European title against Ukraine’s Yuriy Nuzhnenko, live from 10pm.
Fight Betting Tips from www.fightingtips.co.uk
After an unconvincing start to life in the pro game, often fighting in the shadows of brother Ricky Hatton’s world title bouts, Magic Mathew looks to have finally found his form of late. Moving under the protective promotional wing of his fighting sibling, Matt has put together a seven fight undefeated run which has seen him suffer the lows of a controversial draw against IBO champion Lovemore N’dou and the exhilarating highs of collecting the European welterweight title after a career best win over Italian Gianluca Branco.
Defeats to David Kirk, David Keir, Alan Bosworth and Craig Watson mar the 5ft 8inch orthodox’s record but he remains undefeated since May 2008 and has matured from being the Hitman’s back up to a respected contender in his own right.
That draw to Lovemore N’dou last November in Stoke was a pitiful decision and I thought that, after throwing his heart and soul into the contest, his confidence would be shot to pieces.
Credit must go to Hatton for bouncing back however and after a fifth round TKO win over Georgian ‘also ran’ Mikheil Khutsishvili only three months later, Friday’s champion took a massive step up in class to boss Gianluca Branco over 12 one sided rounds. 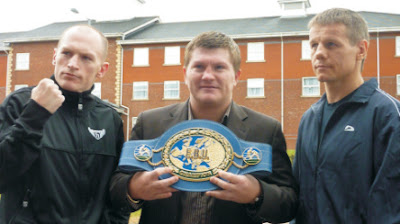 I sat ringside that evening and was mightily impressed by the manner in which Hatton boxed his way to success. The 29 year old was like a new man that night, dictating the fight by way of a snappy jab, and bookies obviously took note, pencilling him in as a 4/7 favourite (Boylesports).
34 year old challenger Yuriy Nuzhnenko, from the fighting city of Brovary, makes his first appearance inside a British boxing ring but with only 1 defeat from 32 career outings, there hasn’t been a flood of money bet against him.
Experienced on the big stage, ‘The Real Man’ is a former WBA Inter-continental champion and WBA interim world champion, having boxed some of the best fighters this continent has to offer since his professional debut a decade ago.
Starting with a 29 fight undefeated record, Nuzhnenko made an audacious bid to swap his interim title for the real thing against fellow countryman Vyacheslav Senchenko in 2009. The gulf in class was too wide however and his world title aspirations were stubbed out thanks to a convincing 118-110 points defeat.
Since that loss, Nuzhnenko returned to record a pair of comeback wins over lesser opposition and fans of an upset can back the away corner at as much as the 7/4 offered by Sportingbet.
With just 1 reverse from 32 outings, against high class opposition, the Ukrainian shouldn’t be written off so easily. No one knows an awful lot about him on these shores and that is a dangerous thing when it comes to parting with our hard earned cash.
Hatton was fabulous in his last, shocking everyone, but he still has some way to go if he is to make up for past mistakes in the eyes of domestic fight fans.
Mathew has been well matched since signing with Ricky, as his recent opponents suggest with 2 of his last three over the age of 38. I firmly believe Mathew is being eased along for a shot at the big time, possibly back in America, and am happy to trust his team know what they are doing in taking on this task, so the outright price is good enough for me.
Punters looking to swell their wallets a bit can invest in the 10/11 (Stan James) about the home town favourite notching up another points win, at interest stakes. Tips 2pts On Hatton
www.fightingtips.co.uk