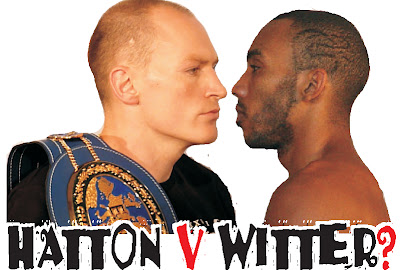 Junior Witter the Former WBC light-welterweight has announced he will be making a ring return and that European welterweight champion Matthew Hatton and his title are in his sights.

The ‘Hitter’ Witter from Sheffield, has been out of the ring since last August, when he lost to Devon Alexander for the vacant WBC light-welterweight title and as been absent from boxing for nine months after injuring himself playing football.
Witter now at the ripe old boxing age of 36, had long courted a unification fight with Ricky Hatton in the past, when they were both world champions, but that fight never materialised through one thing and another.
Video of Witter calling out Ricky Hatton, Now he want Matthew!

But now Hatton the younger has a title, it has whetted the appetite and hunger for ‘The Hitter’ to launch another hit list for an Hatton brother and the other domestic belts, before moving back into the world title picture and a shot at one of the champions.

Witter who will be campaigning at welterweight, still feels he has plenty to give and that he will be too much for the current crop of welterweight’s on the British scene.

His entry into the mix of domestic welterweights that include Kell Brook and Michael Jennings (WBU champion) who both contest the British title on September 18th, is a much welcomed one.

There is John O’Donnell who is on the verge of a title shot. Also Craig Watson the current Commonwealth light-middleweight champion but who will fight at welterweight, and he himself waiting in the wings for a shot at Hatton or the winner of Brook and Jennings.
Manchester’s Denton Vassell the Commonwealth champion is also a target for Witter.
But the fight and the title he feels will give him a world title springboard is Matthew Hatton and his European belt.

“A British, Commonwealth or European belt is a stepping stone,” Witter told BBC Sport. “Denton Vassell’s the Commonwealth champion, so he’s a possible target, but Hatton’s the European champion.
“I don’t see winning one of those being a problem at all, then I want to move up to the world scene and get a title shot.
“Andre Berto’s WBC title is the one I want, but there are other champions out there.” added Witter.

Witter’s only defeats have been in world class company against Zab Judah, Timothy Bradley (right) and Devon Alexander, and hadn’t planned on being out of the ring for so long, but for being injured.

Not being able to fight, proved to not only have been a frustrating time for him, but also a financial headache too having had to turn down paying opportunities to fight including an offer to enter the Prizefighter tournament.

“The injury meant I missed out on Prizefighter,  I thought I could win that easily and get a nice pay day for nine rounds work at most, and they’ve been a few other pay days gone as well.
“But now I’ve moved up to welterweight and want to win another title to get back on top.
“It’s a great division with great champions so there are opportunities for me.”