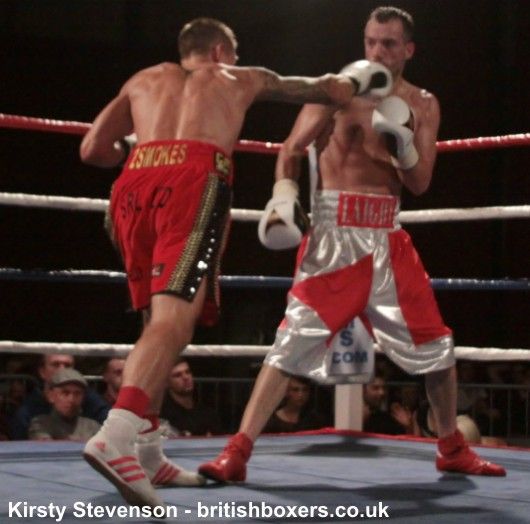 Jon Kays to challenge Gary Sykes for his English title

Jon Kays (right)  isn’t fazed knowing his attributes will be assessed and his flaws focused on when he boxes Abdul Rashid at the Leeds Town Hall on March 22.

Appearing on the undercard of Josh Warrington’s first English title defence against Jamie Speight, Jon’s performance will be scrutinised by an interested observer.
Gary Sykes, the newly crowned English super-featherweight king, will be at ringside to run the rule over Kays, knowing that ‘2 Smokes’ will be the first challenger for his title if he beats Rashid.
“To be honest we know everything about each other anyway,” revealed Kays, who has lost just two of 18 contests.  “We boxed twice as amateurs when he got two decisions over me, although he knows one of those wasn’t the right verdict.
“I can’t look past Friday though and I know I’ve got to get the win.  It’s hard not to look forward but this kid [Rashid] is standing in the way of me moving onto bigger and better things.  So I’ve got to make sure I do a job on him, and then it’s onto Sykes.”
Kays and Sykes are slated to clash on a massive stage; with the pair due to do battle on the undercard of Amir Khan’s fight against Julio Diaz at Sheffield’s Motorpoint Arena on April 27.
Jon knows that, on paper, he will enter the fight as underdog.  Gary is more experienced, a former British champion, and has mixed in better company, but Ashton under Lyne’s Kays is convinced that anything Sykes can do … he can do better.
“Don’t get me wrong it’ll be a very tough test,” stated the 29-year-old.  “He’s a good boxer and has got a good boxing brain.  He’s also got a very high work rate; but I’m super fit and ‘can he stay with me for 10 rounds’, that’s the question.  I’m a very talented, clever boxer myself, and it’s got all the ingredients for a very exciting fight.”
Boxing on the Khan bill will be a dream come true for Kays; with the show shaping up to be British boxing’s biggest event of 2013.  With Sykes hailing from nearby Dewsbury, the smart money will be on the Yorkshireman having the lion’s share of support for the dust-up, but a local connection actually means the Motorpoint will be a ‘home from home’ for Jon on fight night.
“I’m from Ashton under Lyne but my family, and my wife’s, are all from Sheffield, so to box there would be absolutely brilliant.  I’d take a big following and to box on the same bill as Amir Khan and Golden Boy Promotions – you can’t get any bigger than that, can you?”
“Jon has to get through Friday’s test before the fight with Gary,” said VIP Promotions head, Steve Wood.  “Both are VIP fighters though and it’s great to get them matched on such a big event.  I think it’ll be a really good fight and wouldn’t want to pick a winner.”
VIP Promotions presents Josh Warrington defending his English featherweight title against Devon’s Jamie Speight at Leeds Town Hall on March 22.  The undercard for the show includes Dewsbury’s Tony Aitcheson; Liverpool’s Nathan Brough and Tommy Carus; Ashton under Lyne’s Jon Kays; Oldham’s Alex Rutter, and Dudley’s Ryan Aston.
Tickets, priced at £30 (General), £40 (Stage) and £60 (Ringside) are available from all boxers or available on the door.
Keep updated on VIP Promotions’ news by visiting www.vipboxing.com or follow on Twitter @vipboxing.  Currently, you can also watch free fights at www.vipboxing.tv and on the VIP YouTube channel.