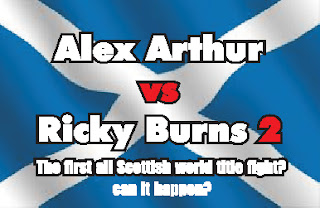 After Ricky Burns ‘Amazing’ victory against all the odds in Glasgow on Saturday night, when he outboxed and baffled toughened world champion Roman ‘Rocky’ Martinez to win the WBO super-featherweight in a fever pitched atmosphere at The Kelvin Hall, Scottish fight fans were licking there lips at a rematch between there new hero Burns and former favorite ‘Amazing’ Alex Arthur.
The two previously locked horns in February 2006, when Arthur out-pointed the then novice Burns to retain his British, Commonwealth and European super-featherweight titles, although Burns proved in that fight that he would have more to give in the future.
.

Arthur went on to win the Interim WBO super featherweight title when he out-pointed Stephen Foster, before losing the WBO strap in his next fight against Nicky Cook in September 2008.
.
Arthur decided after nearly killing himself to make the super featherweight limit for so long, that he would now move up to the lightweight division.
After a first round KO comeback victory against Mohamed Benbiou, Arthur came unstuck against Nigel Wright over 8 rounds, out pointed 76-78 by the Durham man.
.
On Saturday night on the undercard of Burns’ victory over Roman Martinez, a rematch was mooted by Frank Warren, who promotes both fighters, when Arthur returned to the ring to outpoint Bermondsey’s Peter McDonagh 79-74.
.
But Arthur has no plans to step back down to super-featherweight, claiming that lightweight is the minimum weight he can campaign at, scuppering the first all Scottish world title fight.
.
“There is just no way that I will ever fight at super-featherweight again,” said Arthur. “When I fought Ricky back in 2006 I had to lose 10lbs in the last two days previous to the fight.
.
“My calves turned blue and they were so stiff they were like iron, the cramping was terrible. I took a salt drink to try and combat the dehydration and it was the worst thing I could have done. It almost killed me.
.
“I am a family man now with a beautiful wife and three young kids and there is just no way I am going to risk all that for boxing. I know it would be a super fight in Scottish terms, a sell-out and the first time two Scots had ever fought for a world title, but I just can’t go through that again and put my life on the line.”
.
But Arthur says there is one way the pair could face each other. “I give myself three years left at the top and my plan is to become lightweight world champion. Once that happens, I would be delighted for Ricky to vacate his super-featherweight title and challenge me for the lightweight world title.
.
“I said to Ricky after I beat him in 2006 that one day he would be world champion and he has proved me right. God willing one day we will fight again.”
Alex Arthur vs Ricky Burns fight