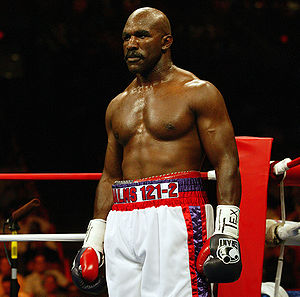 Ring legend Evander Holyfield, who turns 48 years old next month, doesn’t look like hanging the gloves up yet and is infact looking to fight heavyweight champions David Haye and Vitali and Wladimir Klitschko.
Holyfield, the former undisputed heavyweight champion, defends his lightly regarded WBF  heavyweight title against Sherman Williams in Detroit on November 5.
The Real Deal won the belt in April by stopping South Africa’s 41-year-old Francois Botha in the eighth round. But He lost on points to Nikolay Valuev and Sultan Ibragimov in his previous two fights.
Haye has taken Valuev’s WBA belt and Wladimir Klitschko has won Ibragimov’s WBO title. Holyfield said on Wednesday he now had those two fighters in his sights. “I’m looking at both the Klitschko brothers and David Haye.
“I want to fight the people with the titles. My people have talked with the older Klitschko brother (Vitali) and his manager,” Holyfield said of the WBC holder. “But right now everybody’s busy with fights.
“The only thing that attracts them is that if they want a big pay day, they have to fight somebody that the people know. I’m still the most popular heavyweight that is fighting.
“It’s obvious that if they felt I was an easy fight, they would go ahead and fight me. But they realise they don’t want to get duked by the old man.
“But if they want to make money, I’m the guy they need to fight.” Williams has a record of 34-11-2, with 19 knockouts.