Hatton denies any blue language against the reds on Facebook 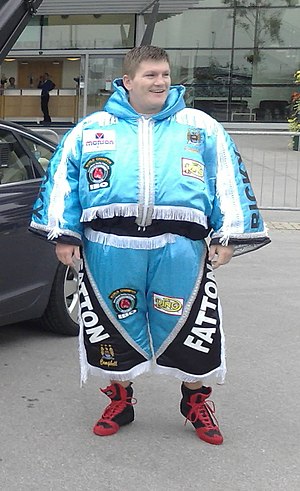 Former light-welterweight and welterweight world champion Ricky Hatton denied any wrong doing on his part regarding his so called slagging off of Manchester United players on his Facebook page, claiming that he ‘Doesnt even use the social networking site!
Hatton who recently has been touted with a possible return to the ring after his defeat to pound for pound champion Manny Pacquaio in May 2009, is a big Manchester City fan and says that he doesn’t even use Facebook personally and strongly objects to any wrong doing on his part.
Hatton said that he is friends with many of the United players and was supported just as much by United’s fans when he was fighting as City fans and has  nothing but respect for the club’s achievements, adding that any banter he may have with United fans, including his brother Matthew is always good humoured.
Hatton promotions and Ricky’s statement:
It has been brought to the attention of Hatton Promotions that false and inaccurate comments have been attributed to Ricky Hatton on a social networking site.
The Facebook page in question has absolutely no links with Hatton Promotions or Ricky.
Lawyers are now taking the necessary steps to have the offending remarks removed and all unofficial Facebook pages using Ricky’s and Hatton Promotions name closed down.
Hatton said: “This rubbish that has been printed makes me feel sick to my stomach. Please, please do not believe a word of it.
“Of course, I am well known as a Manchester City supporter but any rivalry I have with Manchester United is good humoured banter.
“I would never ever make nasty comments about their players or the club’s long history in private or public.
“My younger brother, Matthew is a United fan. I am friends with Wayne Rooney and Rio Ferdinand. Wayne even carried my belt into the ring when I fought Jose Luis Castillo in Las Vegas.
“I can say 100% that I have never used Facebook in my life and that I am proud to say that I got as much support from Manchester United fans as I did Manchester City fans through my career.
“I can assure all Manchester United fans that I have nothing but respect for the club’s achievements although I do look forward to the day City pip them to the Premier League title.
“What has been posted has nothing to do with myself or any Hatton Promotions employee and this matter is being taken up with Facebook as a matter of urgency.”
.