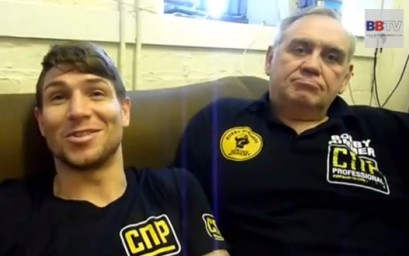 We visited Brian Rose and Bobby Rimmer this week at their gym, to see Brian in the last part of his training camp ahead of his fight against Bulgaian Alexey Ribchev at the Bolton Arena on June 29.

In his last contest, Blackpool’s outright Lonsdale belt holder took care of former world champion Joachim Alcine in April, stopping the Canadian in the 12th and final round to claim the vacant WBO Inter-Continental light-middleweight title.

‘The Lion’ is now on the brink of world level and his new promoters Matchroom are trying to land the big one and get him a shot at a world title in the near future. A big unification and interim world title fight was very close to being made recently against Australian Anthony Mundine. In fact flight tickets were almost booked for that one, only for Mundine to cancel after getting offered a fight with Shane Mosley.

Rose and Rimmer talk to BritishBoxers about all this and more, plus we show a short clip of Brian training with former British bodybuilding champion, nutritionist and strength coach Kerry Kayes, who plays an important role in the preperation of the boxers who he works with. Kayes who used to work with Billy Graham and Ricky Hatton back in the day, is now an important member of team Rose and is a close friend of Bobby’s.

We will bring you more footage with Kerry soon, talking about his training techniques and the importance they have on the boxers overall conditioning and recovery rate.