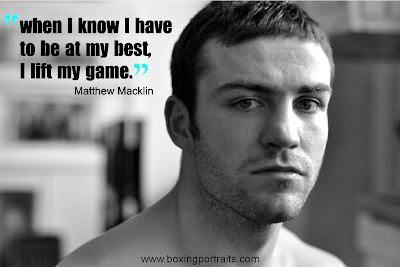 Matthew Macklin on Saturday night has the chance to become Britain’s sixth current world champion and the first Birmingham born boxer to win a world title by beating champion Felix Sturm for his WBA middleweight title at Lanxess Stadium in Cologne Germany.

Macklin will start as the undoubted underdog against Sturm but the Birmingham-born fighter of Irish stock believes this is just the sort of occasion which will bring out the best in him as he attempts to realise his boyhood dream of winning a world boxing title.
European champion Macklin will need to raise his game to a level like never before to defeat Sturm on away soil. The German is unbeaten in five years and is one of the more impressive of world champions. He has a record of 38 fights – 35 wins, 2 losses and 1 draw. The two defeats came to Oscar De La Hoya in 2004, losing his WBO title and then losing his WBA world title to Spaniard Javier Castillejo in 2006.
The fight against the Golden Boy De La Hoya was a controversial points defeat, but with many thinking he deserved the win. Sturm rose to prominence despite the defeat to De La Hoya, his first loss and would go on to win the WBA title against Maselino Masoe, before losing it in his first defense against Javier Castillejo. After winning the rematch with Catillejo and regaining the title two fights later, Sturm has not looked back, with good wins over Sebastian Sylvester, Giovanni Lorenzo and Ronald Hearns along the way.
Felix Sturms fight against Oscar DeLa Hoya
ibhof2
“There won’t be a new world champion on Saturday night,” Sturm promised his fans after the open workout at the Köln-Arcaden. “Cologne is Cologne and fighting inside the Lanxess Arena is always special to me, I’m ready for a great battle. added Sturm.
Underdog Macklin has had to be patient in his wait for a shot at a world title and is under no illusions about the magnitude of his task in hand, but believes that the level of opponent will bring out the best in him.
“It’s only natural Sturm will be the favourite but I’ve had the best performances of my career when I’ve fought the best fighters, for fighters not at my level I drop to their standards.
“When I’ve been underdog or gone in up against it, that’s when you’ve seen the best of me. The nerves make me perform better, they make me sharper and when I know I have to be at my best, I lift my game.
“I’m so confident. I’ve watched some of his fights when he’s at his best and it gives you goose pimples. But then I think about how I look when I’m at my best and I am more than capable of beating him.
Interview with Matthew Macklin By www.boxing-ireland.com
“It is a real clash of styles. He’s good defensively, but I’m good at attacking. And whatever way the fight goes, at some point he’s going to have to trade with me and I am very confident that I have the power to win.
Having defeated Manchester’s Jamie Moore in 2006, he set about rebuilding his career, he has had training spells with Buddy McGirt and Floyd Mayweather Snr, before stepping up from light-middleweight to middleweight and since joining up with trainer Joe Gallagher at his very successful Manchester gym, Macklin as gone from strength to strength.

Macklin won the British and European title in successive fights in 2009, before Injury forced him to vacate his European crown last year, before coming back to regained the strap with victory against Shalva Jomardashvili last September.

The Midlander was being lined up to face Londoner Darren Barker and was close to signing a fight with Ronald Winky Wright. But with them fights not materialising, fortune favored the patient and he was rewarded with the world title match he craved, against Sturm.

“Saturday night just can’t come soon enough. I’m really confident and looking forward to it. Macklin told Ian Johnson of the Birmingham Mail.
“Like I said, the challenge of Felix will take my game to another level. I’ll have to be at my best – but no doubt I will be.
“When I win this fight it will open doors to bigger fights and that has given me extra motivation. I am up for this fight.
“I have the chance to become the WBA middleweight champion of the world, the chance to move into a world where boxers earn millions of pounds.
“Become the first Birmingham-born lad in the history of the sport to become a world champion. What an honour.
“I will have fantastic support at the 20,000 seater Lanxess Stadium from my fans from Birmingham and Ireland. And I will send them home happy.
“It’s the chance to make my boyhood dream come true. And how many young lads get that chance?
German Press Conference clip