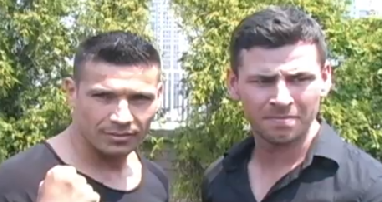 “Dazzling” Darren Barker says he will make middleweight champion Sergio “Maravilla” Martinez pay for under estimating him, and plans to make his size advantage count on Saturday night at the Boardwalk Hall in Atlantic City and bring the WBC World Diamond middleweight title back to England.

Unbeaten London Middleweight Darren Barker will be up against one of the best fighters around when he takes on the American based Argentinian hero, but the Matchroom Sport promoted boxer is excited about fighting in the States for the first time and is bouncing with confidence going into the biggest fight of his boxing career.

Should Barker the current European champion, upset all the odds and defeat the 36 year-old Martinez to claim the scalp of the best middleweight in the world. It will be a dream come true a monumental victory and a fitting tribute to his brother Gary, who sadly died in a car accident aged 19, five years ago this December. Gary was also a successful amateur boxer who had won the London ABA’s a couple of month’s before his untimely death and was also destined for the top in the sport.

Barker was never going to box again after spiraling into a drunk fuelled depression after Gary’s death. But the courage of the man and his burning ambitions to continue on and get his boxing career on track was admirable. But it was a long road to fully recover and accept Gary was gone. The fight with Martinez will not be as hard a battle, as the one he has already fought!

He returned to trainer Tony Simms’ Essex gym after a few months but he did not feel right. He thought he would have no choice but to hang the gloves up. Not only a friend but a close confidant, Simms asked Darren to meet with Bruce Lloyd, a therapist who specialised in helping emotionally broken people, mentally get through traumatic experiences. Darren agreed to see the specialist and after a few painful sessions, Darren began to mend himself and realised his future lay in boxing and continued with his career.

He went onto win the British, Commonwealth and European titles and remain unbeaten. With a record of 23 fights, 14 coming by KO, Barker now has the chance of the big one. A chance to ‘Dazzle’ to beat one of the best fighters in boxing and become the No1 middleweight in the world. – And what an epic story it would be if the nice guy from Barnett can do it.

And Barker says he is ready to do just that on his American debut! – To shock the world and do what most experts think is the impossible and dethroning Martinez!

“I have massive respect for him as a fighter but he has the title that I have always wanted and I’m coming to take it.” said Barker.

“Fighting in America for the first time is really exciting too and I hope that my loyal fans will come over in droves to be a part of the biggest night of my career. I am in boxing to test myself against the very best in the business and I believe I can shock the world.

“Martinez is talking about the other fights that he wants to have, well, he is in for a big shock on October 1st.

“He is underestimating me and if he wants to do that, fine and I will make him pay for taking me lightly and looking past what is right in front of him, I’m fighter who has the hunger, the spirit and the skill to beat him.” added a determined Barker.

Barker arrived in America on Sunday to acclimatize and prepare for his last week of training before the big night and the relaxed challenger spoke to the waiting press with an air of confidence and belief. And now as fight time approaches Barker is fully focused on the job at hand and fully aware of the task before him.

“When you look Sergio’s last three performances against Kelly Pavlik, Paul Williams and Sergiy Dzinziruk, they are the fights of a true great of boxing and he looked great doing it. But I believe that I’m the proper Middleweight of the two of us.

“I’m 29 and he’s 36, I’ve got the ambition and desire behind me to become a world champion and everything is ahead of me just waiting there for the taking, which is what I plan to do in Atlantic City.”

“I cannot wait to get in the ring with Sergio Martinez,” Barker added.

Barker rose to fame at the 2002 Commonwealth Games in Manchester, where he claimed Gold for England in the light-welterweight division, the highlight of an amateur career that saw him win 55 of his 68 bouts.

He turned professional in September 2004 with a points victory over Howard Clarke and his second fight of the year saw him stop David White at the Wembley Conference Centre in December. Barker maintained his unbeaten start to his career in 2005, winning all five of his fights and topped that in 2006, with seven more victories including a points win over Hussain Osman at Alexandra Palace to claim the Southern Area middleweight title.

After brother Gary died in a car accident, Barker took nearly a year out of the ring, but returned in October 2007 with a third round stoppage of Greg Barton at York Hall. One month later, Barker fought for his first major title in November, taking on unbeaten Ben Crampton for the Commonwealth title, the Australian who had won his previous 20 fights. Barker claimed the belt at York Hall with unanimous decision and defended the title for the first time against Steven Bendall in the same venue with a seventh round stoppage in February 2008.

In December 2008 Barker took six rounds to defended his title for the second time against Jason McKay in Brentwood and then defeated Darren McDermott in May 2009 in a British title eliminator with a seventh round stoppage in Watford.

Danny Butler stood in the way of Barker and the British title in a fight that doubled as his fourth defence of his Commonwealth title. The Brentwood Centre in Essex was the venue as Barker added the British belt to his Commonwealth belt with a seventh round stoppage, extending his professional record to 21-0.

His next fight in April 2010 saw Barker fight for another title – taking on Frenchman Affif Belghecham for the vacant European title at Alexandra Palace, London. The reigning French and EU champion provided the toughest test of Barker’s career to date, but the Londoner shone through in front of his home support, earning a unanimous decision to claim his third title.

The next man in Barker’s sights was Matthew Macklin, the Birmingham-born Irishman who had vacated the European title for a shot at the World belt which never materialised. The pair were ready to do battle in September for the British and European belts after Barker vacated the Commonwealth crown but injury robbed Barker of the chance to appear in the Birmingham show and Macklin went on to beat Barker’s replacement to regain the European crown and the pair still remain destined to meet somewhere down the line.

Barker returned to the ring in April 2011 after a year out of action to fight Italian Domenico Spada for the vacant European belt. He outpointed the Italian challenger over the distance to once again lay claim to the strap.

So to the present day and big fight week, on October 1st 2011 – Can our boy go and follow other British fighters who have become legendary by winning world titles abroad?

The like of Ken Buchanan who scored an almighty upset in September 1970 when he went over to Puerto Rico to beat Ismael Laguna and bring back the WBA world lightweight title.

Or the ‘Raggamuffin’ man himself Lloyd Honeyghan who rocked boxing to its boots in September 1986 when he beat welterweight king and the No1 pound for pound fighter in the world at the time Don Curry, to win the WBC, WBA and IBF welterweight titles.

It’s been done before and it can be done again!