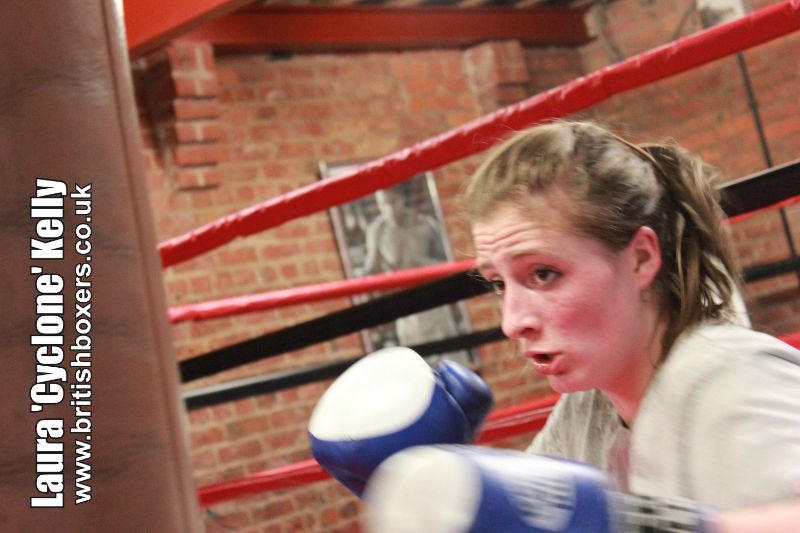 Chris MaylettMarch 15, 2012
ArticlesInterviewLATEST BOXING NEWSvideoVideo Interviews0 Comments3 min read
Laura ‘Cyclone’ Kelly is one of the hot amateur boxing prospects in the country, and in our opinion, destined to be one of the best female fighters in the country. We went along to Laura’s training camp at the Manchester Boxing Centre of Excellence, in Gorton, run by Kevin Williams, to film our two part picture of this superb boxing talent.
We get a glimpse of the training she does, watch the unbelievable blur of her hands as she hits the pads with her dad, and to find out what makes this endearing kid such a big boxing hit! – An avid trainer, running every morning, training in the gym, college or at home, her conditioning and fitness are at consistently high levels.
Granddaughter of the former world title challenger Edward ‘Cyclone’ Kelly, Laura has boxing in the blood, and together with
her granddad’s adopted nickname of ‘Cyclone’ – Laura is following in his footsteps! – Laura, from Rochdale, nr. Manchester, was crowned junior champion of England in the 58kg weight category in 2010. Overcoming the experienced Southern Counties champion and home favourite Kayleigh Taylor in Portsmouth.
The Gorton ABC boxer claimed another national title the following year, with a stellar performance in the same competition. Add to that a European Bronze medal, it is hard to believe this teenage boxing sensation, has been competing for just over two years.
Laura has also recently been called up to train with the Great Britain squad at their centre of excellence in Sheffield, benefiting from fantastic training and sparring with the best female boxers in the country, as well as the visiting Indian boxing squad. She is being assessed by GB for the development squads and it might not be long before the selectors come knocking on the Kelly’s door!
Part 2
Trained by her dad Scott, a former boxer, the pair have embarked on a fighting journey that they
believe can lead them to the 2016 Olympic games and keep the family boxing name going through another generation.
In our exclusive interview with Laura and her father Scott, we take a look into the training camp and the thoughts of the fighting Kelly’s. Laura tells us about her love of coaching other girls at her gym, plus, what it takes to be a female in boxing, and her dreams and plans for a future in the sport.
Laura ‘Cyclone’ Kelly is one to watch!