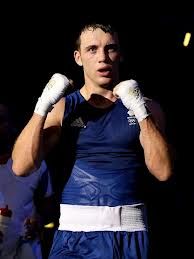 GB’s Freddie Evans won the Olympic silver medal in the men’s welterweight division after his final against the brilliant Kazakhstan boxer Serik Sapiyev on Sunday. Sapiyev claimed the win with a final score of 17-9 victory at the Excel Arena in east London.

Evans is now officially the most successful Welsh Olympic boxer, going one better than another Welsh hero, Ralph Evans who won a bronze in 1972 at the Munich games.

Evans, 21, was expected to try and counter punch the experienced Sapiyev to claim victory, but struggled with his opponents longer reach throughout the fight, missing with many of his shots as the Kazakhstani fighter was able to fight better at range, picking Evans off.

Sapiyev, the world championship silver medallist last year and a former two-time world champion at light-welterweight, boxed well behind his southpaw jab to win the first round 4-2, and continued his success in the second with a score of 6-3.

Evans wasn’t throwing enough punches in truth and Sapiyev who began to look super confident and showboated took advantage. Evans did his best to turn the fight in the final round but the in form Kazakhstan hero Sapiyev was sharp and his punches were far more effective.

It was a gallant effort from Evans, but Sapiyev’s quicker and stronger shots won him the final round 7-4 and sealed the Gold.

Evans visibly disappointed at the end, should be proud of his efforts, reaching the final, taking Silver and writing his name in British boxing Olympic history. Freddie becomes only the second Welsh boxer ever to win an Olympic medal. He can be proud of his London 2012 efforts and can take not only a Silver medal but a great experience from the Games. His path to the final included four wins, including a victory over world number one Taras Shelestyuk. Well done Freddie here’s to a bright future.

“I’ve had five hard fights and I have no excuses, he was a bit sharper on the day. Evans told the BBC after the fight.

“I’ve had a great tournament, I beat the world number one from Ukraine. I’m only 21 and I’m one of the youngest seniors here. I’m over the moon really that I got to the final.”