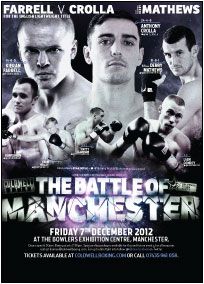 After spending large portions of 2012 delivering significant assignments for lightweight star, Kieran Farrell, Dave Coldwell continues the trend as the Heywood entertainer places his perfect ledger on the line when he defends his English strap against former domestic ruler, Anthony Crolla.

The“Battle of Manchester” which takes place at the city’s Bowler’s venue on December 7th is the sternest test of Farrell’s career thus far but Coldwell cuts a confident pose when discussing the contest.

“This is undoubtedly a massive step up for Kieran but he’s a fighter heading in the right direction and I feel he could be getting Crolla at the right time,” revealed Coldwell.

“Kieran is a terrific kid and he’s made great strides since signing for me and I firmly believe that 2013 is going to be a big year for him. I’m grateful for Hatton Promotions for helping us put this cracking fight together and there’s going to be fireworks once the first bell goes.”

Farrell’s quick rise to the upper echelons of Britain’s lightweight rankings has come courtesy of a number of quick victories that culminated in a four-round demolition against the then-unbeaten Joe Elfidh at Bolton’s Reebok Stadium in June. Farrell’s dismantling of the Derbyshire man was carried out in thrilling style and it boosted Farrell’s reputation as a fan-friendly fighter. With Crolla cut from the same bloodstained cloth as his upcoming opponent, the winter showdown has all the necessary ingredients to provide another classic for the popular promoter.

“Although I’ve got to look out for my fighters best interests, I’ll still step them up when the time is right if the fight makes sense and this is a fight that makes a lot of sense from every possible angle. Kieran wants to get to British level, Anthony needs to get back there, and from a fans point of view, what more could you ask for? This is an English title fight that is worth so much more for the winner because whoever wins it will be knocking at the door of the big guns at lightweight. Seriously, can you think of an English title fight as good as this one?”

Providing support to the main event will be Liverpool’s Derry Mathews, who makes a speedy return to the ring following his Prizefighter setback earlier this month. The former British champion will be a keen spectator at ringside and Coldwell was quick to point towards a possible 2013 scrap between Mathews and the main feature’s winner.

“Derry Mathews is a fighter that we’re delighted to be promoting on December 7th and we’ve definitely got one eye on him fighting either Farrell or Crolla early next year if everything goes to plan.

“This is a quality little triangle of lightweight fighters and I’m delighted to be working with all three because they all know how to put a good show on for the fans”I’m certain that Derry will get the win and then it’s all eyes on Farrell v Crolla for what should be the ideal fight to end 2012 for Coldwell Boxing.”

The Battle of Manchester” takes place at Bowlers in Manchester on December 7th and is headlined by Kieran Farrell v Anthony Crolla for the English Lightweight title. Also appearing will be former British champion, Derry Mathews, along with a number of quality prospects such as Hosea Burton, Liam Conroy and Liam Hanrahan.