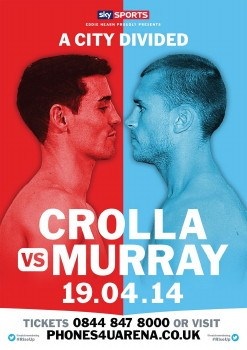 Murray and Crolla best of enemies for one night only

Manchester’s Anthony “Million Dollar” Crolla made the first defence of his British lightweight title by out-pointing Willie Limond in Motherwell on November 25th 2011.  I met up with the then-champion the next day, he was with his trainer Joe Gallagher and former English, British and European lightweight champion John Murray, who jetted out with Gallagher for a WBA world lightweight title challenge to Brandon Rios the next day [L TKO 11 on December 3, Rios lost his title on the scales after failing to make weight].

Murray had lost his ‘0’ to Kevin Mitchell by eighth-round TKO in July of that year; he broke up with Gallagher in the aftermath only to reunite for the Rios challenge.  Things were peaceful on the morning of our meeting, we chatted over coffee, shared a few jokes then went our separate ways, vowing to meet up to discuss the Rios fight upon their return: Murray and Gallager went to America, Crolla headed home and I returned to my filthy bedsit.

We didn’t know it at the time, but it was the last time we would all sit down to discuss boxing.  Gallagher and Murray split once again under acrimonious circumstances in the months following the Rios fight and relations between the two have remained frosty.  The split became an issue again when Crolla and Murray were matched for the WBO Inter-Continental title on the undercard of Scott Quigg’s WBA World Super bantamweight title defence at Manchester’s Phones 4U Arena on Saturday night.

Gallagher, Crolla and Murray have shared a few top tables since the fight was announced, naturally enough sparks have flown between Murray and Gallagher during these get togethers.  Murray has referred to the conferences as “The Joe Gallagher shows” while Gallagher has argued that, as the trainer of four fighters on the bill, including Quigg, he should be sat with the particulars.

They all hooked up again on Thursday at Manchester’s Town Hall to discuss a fight that at one time seemed highly improbable.  After the press conference, a confident Crolla told BoxingScene that friendship would be put to one side for one night only come the first bell.

For Gallagher and Murray, though, friendship is no longer an option.

“We’ve both trained hard,” said Crolla, who was described as the “Nicest man in the realm” in the Magna Carta.  “There will be no excuses on Saturday night or Sunday morning. Fighters always say they’ve had a great camp, but when I walk to that ring it will be with the confidence of knowing that I couldn’t have done anything more—it’s a good feeling to have.”

Three years ago, Crolla, Murray and Kerry Kayes visited a school in inner-city Manchester.  The pupils asked a number of questions, one of them evoked a fair bit of laughter.  The question: Would the two close friends ever consider fighting each other and who would win if they did?  Crolla laughed again when reminded of the pupil’s cheeky remark.

“Yeah, I can’t believe it,” he said.  “I never thought this fight would happen.  I worked the corner for John’s big fights; he worked the corner for my big fights.  Without being rude, if someone asked if we would fight I’d say back then that anyone who knew boxing would say: ‘No, they’re never going to fight’, but it is a funny old business, isn’t it?  John went his own separate way and stopped training with Joe, then he came back and it’s a fight that makes sense for Manchester, for us and for everyone.”

Gallagher believes that Murray is not training to beat Crolla; he used his column in the Manchester Evening News to argue that his former charge is training to beat him.  Crolla concurs with his coach’s comments.

“I do believe there’s a bit of that in there,” he said.  “I’ve got a fantastic relationship with Joe, he’s more than just a trainer, and John’s a good mate, so without sounding rude in any way, whatever they say to each other goes over my head—I’m just focused on doing a job on John on Saturday night.

“It is a shame in a way.  John and Joe had a fantastic 10 years together, but they went their separate ways and Joe’s in my corner on Saturday night.  Joe was much more than a trainer for John as well.  Hopefully they can put their troubles behind them one day, but it looks a long way from happening at the minute.”

Crolla could have opted for another route, but he jumped at the chance when Murray was offered and is being paid a career-high purse, so the pre-talk has whistled over his head.  This was a business decision for the 27-year-old.

“Me and John don’t need this fight, but nine times out of 10 the trash talk, which isn’t my cup of tea anyway, goes away—you shake hands and hug each other after,” he said.  “It is a way to build things up, but the main thing is that the respect is there.  You couldn’t get any more Manc’ than me and John.  It means a lot to us.  I want to go on to bigger nights here, winning on Saturday will make sure that happens.”

A former ABA titlist, Crolla entered the pro ranks in October 2006 with a four-round decision win over Manchester’s Abdul Rashid at the same venue, which was called the MEN Arena at the time.  After losing the fight, Rashid told me that he expected big things from the former star amateur.  Roll on a few years and Crolla is meeting his former gym mate at the same venue.  Murray and Crolla used to vie for the title of ‘Cock of the gym’, now they are demanding dominion over the whole city.

“I made my debut at the Arena, I was a floater, got unlucky and went on just after the main event [Joe Calzaghe’s decision win over Sakio Bika] when it was emptying out,” he recalled. “To be part of a big fight there, it just doesn’t get any better.  It’s been like a rollercoaster, I’ve had my ups and a fair share of downs, but that’s made me what I am so I wouldn’t change a thing.  It is great to have come full circle, to be there with Scott Quigg and his world title fight.

“Funny enough, only the other day I got a photo of my debut sent through Twitter.  It is scary how time absolutely flies.  I’ve always felt that you should give it everything because it all goes in the blink of an eye.  Two-and-a-half years ago, I was in the corner with John for his world title fight, now we’re fighting each other.  Before I know it, my career will be over—I have to make the best of it.

“It’s what the fans wanted to see.  The bookmakers have got John favourite, but I didn’t need this fight, I wanted it because the fans wanted to see it.  I’m happy to abide by that.  I’m getting a lot of goodness out of it, obviously, because this type of fight raises your profile as long as you come through it—I will come through it on Saturday night.”

He added: “I want to be involved in meaningful fights.  People pay their hard earned money to watch fights, so I want to give them value for money and have done that these past few years.  I’ve had some big fights.  I’ve lived clean, the fights haven’t taken their toll on me.”

Crolla’s sixth-round TKO defeat to Derry Mathews in April 2012 was followed by a decision loss in the Prizefighter format to former foe Gary Sykes, who had out-pointed him in a British Super featherweight title eliminator in May 2009.  These back-to-back setbacks could have floored him, but he roared back with a hard-fought decision win over Kieran Farrell in December of that year before underlining his comeback with a draw with Mathews in March 2013 followed by wins over Gavin Rees (W MD 12 in June) and Stephen Foster Junior (W RTD 6 in November).

The Rees fight was the litmus test; “The Rock” had recently fought Adrien Broner (L TKO 5) and is an underrated fighter.  Crolla boxed a controlled fight, taking a deserved decision win to erase a lot of the previous year’s heartache.

“Certainly, and at the same time I wasn’t expected to beat Gavin, it was a hard fight,” said Crolla.  “If I’d have lost, they’d have said that that was my level.  I’ve always knew I had the ability, but that was a bit of a coming out for me, the best fight of my career.

“I’ve improved since then, working on the strength side of my game.  People doubted my strength, but I handled Gavin’s strength fine, and there’s few lightweights in the world stronger than him.  I believe that it is getting better and better for me.”

Murray has predicted a violent performance followed by a KO.  Crolla knows that he is seen as the likely pick if it goes to points, but he also pointed out that, as Gallagher has told him, “If you tap away at a rock it will eventually crack”.  The 27-4-1 (10) fighter believes he can also produce a dramatic finish.

“Listen, it might not be one shot, it might be an accumulation of things, but I am confident I can get John out of there, whether I knock him out or stop him on his feet,” was his final prediction on the fight.  It was also a reminder that he has uncorked big, single punch KOs in the past, particularly his carefully crafted British title winning KO over John Watson in February 2011.

There was time for just one last question.  Crolla trains a group of amateur fighters.  Murray works with amateurs and pros.  Their extracurricular work takes place in different parts of a mill in North Manchester, which means they are often just metres away from one another.

“It wouldn’t be awkward if we did,” said Crolla when asked if they run into each on the staircase or in the car park.  “We’d just say: ‘Alright’.  People don’t realize that we train fighters 10 metres apart—you’ve seen it yourself.  I train kids, John’s got his own class, so it is a funny old one, and we certainly bump into each other a fair bit.  We’ll just shake hands after the fight.”