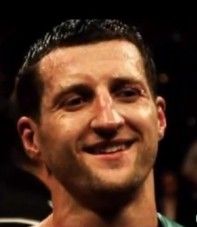 Carl Froch retained his WBA and IBF super-middleweight world titles stopping George Groves in controversial circumstances in the 9th round at a packed out Manchester Arena on Saturday night.

Groves may have lost the fight, but he won over the crowd and his critics with a measured determined display of boxing, dropping Froch in the first round with a left hook, right hand that crashed off the champions chin. Froch in typical warrior fashion got up and shown his resilience, but Groves from that point was in the ascendancy and took over the fight, giving Froch, 36, a torrid night until the stoppage.

The fight lived up to the hype, it was a cracking match-up and candidate for fight of the year, but was stopped prematurely after Groves was caught by a combination wobbled and referee Howard Foster jumped in and stopped it.

Groves, 25, came out with intent, on the front foot he took the fight to the champion from the first bell and after landing the counter jab a few times he unleashed the big right hand he had promised a couple of times and before dropping Froch, it was the right hand that looked the honey punch for Groves. Froch caught cold got up but he was looking worryingly open to the challengers sharp right hands.

Groves continued to cause the champion a world of problems, but Froch dragged himself back into it and gritted his teeth, but it was looking like Groves was the real deal and the championship belts could be changing hands. The fight became a war of attrition with both laying it all on the line, but it was Groves picking up the points.

Froch had to weather many storms and at times was hurt by Groves who had got his tactics spot on. Groves was booed into the ring by the fans in attendance but began to win them over with his performance.

In the finishing round, the shots from Froch that ended the contest, were hard accurate and on the button and Groves was shaken to his boots, but none more so that Froch had been in the first round. We never like to see boxers take one too many, but this fight was now a brutal affair anyway and both had shipped heavy punishment prior, the fight was reaching critical stage and the tension was high, but Groves deserved to fight his way out of trouble, given the script the fight had taken.

But the fight was over and a devastated Groves remonstrated with the official, but it was to no avail his dream was over, but boy did he surprise many, including Froch and he left the ring to cheers from the same fans who had booed him in. Groves comes out of this with great credit and a rematch with Froch is surely going to happen in 2014, he deserves it.

WBA World super bantamweight Scott Quigg bounced back from the disappointment of of his last fight dominating and then stopping Diego Oscar Silva in the second round.

The 23-year-old Manchester fighter fought to a draw in his last fight which was the first defence of his title against Yoandris Salinas, here Quigg looked powerful and purposeful and walked through Silva and put on a good performance in front of his home fans. Quigg takes his record to 27-0-2.

Former middleweight title challenger Andy Lee made quick work of it and was impressive in stopping Ferenc Hafner in the second round.

Hafner came out fast looking to land big shots, but when Lee started to put his punches together he hurt Hafner and dropped him halfway into the first round with a left to the body.

Lee, 29, scored another knockdown in the second with a timed counter left cross that landed as a counter to drop Hafner again. He got up quickly, but then a right hook dropped. Hafner again and the referee stopped it at 1:19 of the round.

Anthony Crolla prevailed in the Manchester derby lightweight fight with Stephen Foster Jr to retain his WBO inter-continental title after Foster failed to come out for the 7th round. Crolla boxed very well behind his stiff accurate jab, but it was his body shots that were the key to victory and when he landed them, Foster was feeling the force.

Foster had stepped in at late notice, but was in good shape and gave it his best shot while it lasted, but the in-form Crolla was just too much for him in the end. Crolla is in line for big fights now and 2014 will be interesting for him.

WBO lightweight world champion British super-featherweight champion Stephen Smith stopped Argentinian Sergio Manuel Medina in the 8th round with a left hook to the body, which ended the contest at 2:39 of the last session. Smith, 28, claimed the WBC International Silver belt with the win, but it was a frustrating night up to then for Smith, with Medina making it a scrappy night, coming in with his head all the time. But Smith kept his composure and in the end got to his man to bring an end to the fight.

Former world bantamweight champion Jamie McDonnell had his first fight under Matchroom, when he took part in an eight rounder against former world title challenger from France Bernard Inom. McDonnell who was recently stripped of his world title went through the motions for most of the fight, but gradually put more pressure on against the mush smaller Inom and from behind his decent jab, finally began to wear Inom down.

From round six, McDonnell stepped on the gas and began to hurt his man. In round 7, McDonnell put more pressure on his much shorter opponent who looked a lot lighter, and forced the referee to step in to stop the contest.

The Doncaster boxer will hope to be back out again soon and has his sights set on the winner of Stuart Hall and Vusi Malinga who will contest McDonnell’s old title now vacant, on December 21st. McDonnell defeated Hall in 2011 and will fancy his chances again, if the Darlington man wins. If not McDonnell will feel he has the beating of Malinga if he wins. Winning back his world title is the No1 target for the British, Commonwealth and European champion.

Rocky Fielding knocked-out Luke Blackledge in the first round in defence of his super-middleweight Commonwealth title. In a fight that was expected to be more competitive, Fielding kept his cool and caught the in rushing Blackledge with a left hook bang on the chin after slipping a right hand. Blackledge from Accrington looked out before he hit the ground and was down for a while. Blackledge came in as a late substitute for Guyanese fighter Lennox Allen.

It was a good win for the ever improving Fielding from Liverpool, who will now hope to move on to bigger things and will now target a fight with British champion and fellow Scouser  Paul Smith. Blackledge had been lined up to challenge Smith in December but the fight fell through.

Olympic Gold medallist Luke Campbell taking part in his 4th professional fight took on Chuck Jones over four rounds and was taken the distance for the first time by the game Jones who took the fight at the last minute after some previous opponents pulled out. Referee score was 36-40