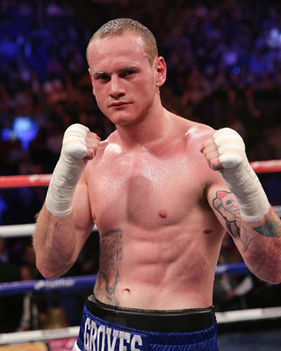 Super-middleweights George Groves and Carl Froch are at it again. Just minutes after defeating Christopher Rebrasse at Wembley’s SSE Arena, Groves was challenging longtime rival Froch to a re-match – despite having been beaten by the current IBF champion in both their previous bouts.

The victory takes Groves, 26, into the mandatory challenger position for the World Boxing Council title, currently held by the American Anthony Dirrell. But it was Froch that Groves had on his mind post-bout.

“You’ve stopped me twice Carl, but I still think I can beat you,” he shouted. “Everyone will laugh but so be it, maybe we can do it again. I know you are dancing around at the moment and not in boxing.”

Froch, who had spent the evening laying into Groves, this time as a pundit for Sky Sports, was quick to dampen his fire. “Third fight with me? You know if it was 1-1, in two close fights, then you have the decider,” he said. “If I’m going to have the decider with anyone, it’s got to be Mikkel Kessler.”

Groves’ European title came after a high-energy performance in the first six rounds, with commentators speculating this would lead to a crash and burn late on. But, while he might have run out of steam in his two bouts against Froch, on the night Groves kept up the pressure, and comfortably earned the unanimous decision win.

So the question is, who next for Groves? His new promoters, Sauerland, will be understandably keen to get him back into the world title picture as soon as they can after this European victory. But the chances of a fight against WBC champ Anthony Dirrell are looking slim, as the American refuses to fight in the UK. “There’s no way I’ll be going to the UK,” he told the Daily Mail.

With Froch ruling himself out of a third bout, more likely options for Groves is the winner of WBO world champion Arthur Abraham and Liverpool’s Paul Smith who meet this Saturday night in germany.

While location remains a problem for Dirrell bout prospects, Groves is still insistent. “We want to take the quickest route, rather than the easiest,” he said.

“He’s been very disrespectful. He’s got his win, he’s the champion and I’ll give him that respect. He says he doesn’t want to come to the UK, but we might make him.

“He says he doesn’t want to fight me, but now he has to. He’s in for a rude awakening.”

There are closer ties with Abraham and Smith. Smith’s boss Eddie Hearn of Matchroom co-promoted the Groves-Rebrasse match with Sauerland, while Abraham is a Sauerland boxer too.

Whether you want to wager on just who Groves’ next opponent will be, or whether you reckon Froch will scoop the Sports Personality of the Year award, you can bet on boxing at Betfair.com, who currently have him placed 6th favourite to win the coveted annual sports prize.

VIDEO: George Groves reveals that sometimes you need to get nasty to get inside the heads of your opponent.