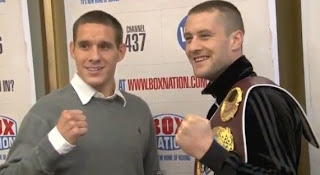 Kugan Cassius and James Helder the assiduous Roving Internet TV reporters for ifilmlondon.com were on hand in the Capital today, to bring us the Press Conference to officially announce the ‘Three Kings’ boxing show.

All the video interviews from the presser can be viewed below.


Scottish
star Burns, 28, a two-time and two-weight world champion, is hot off a
stunning performance against Kevin Mitchell last month when he destroyed
his English rival inside four rounds and heads into another big Auld
rivalry clash.

Cromer based Walsh, 26, has stopped 10 of out 13
early and comes from a fighting family with brothers Ryan and Michael
both unbeaten professionals.