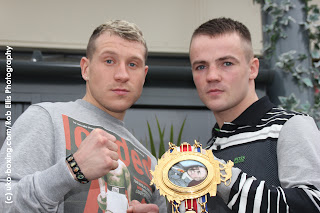 Frankie Gavin and Jason Welborn went head-to-head yesterday ahead of their British Welterweight Showdown in the new year.

The pair met at a press conference in Dudley to promote the fight, which takes place at Walsall Town Hall on Friday, 18th January 2013. It is also live and exclusive on BoxNation (Sky Ch. 437/Virgin Ch. 546).

Gavin (14-0) will be looking to make a successful first defence of the British strap since defeating Junior Witter in November. The Birmingham boxer is in confident mood ahead of the clash with fellow Midlander, Welborn.

“It’s come around very fast and I’m happy about that,” he told www.uko-boxing.com. “I haven’t been busy during the last couple of years, so to be back out there so soon after beating Junior Witter is a bonus.

“I’m expecting Welborn to come forward and try and take me out. He’s not going to be able to out box me so he’ll be coming to upset me and take me out of my rhythm but I think I’ll be too much for him.

“I’m looking forward to the fight, especially as it’s in the Midlands. Walsall Town Hall is a lot like York Hall, where I won my title, so I can’t wait. It will be an electric atmosphere in a sell-out venue.”

With Gavin hailing from Birmingham and Welborn hailing from the Black Country, it’s a Midlands derby that will attract a national audience.

Tickets are selling well for the Frank Warren Promotion – in association with Errol Johnson –  and Welborn (11-1) is confident that, cheered on by a bumper crowd, he can cause an upset.

“It’s a massive night for me,” the Rowley Regis fighter told www.uko-boxing.com.  “Being at the press conference makes it all feel real now. I’ve waited a long time for a chance at someone like Frankie and I’m ready to step up.

“He’s a good boxer with a good pedigree but I don’t think he’s got my strength. I’m strong and can really punch. I want this. This is a massive opportunity for me.

“To be fighting in the Black Country for a British title is amazing. It’s the perfect Christmas present.”

There is an action-packed undercard as Walsall’s Martin Gethin takes on Londoner Ben Murphy for the vacant British and Commonwealth Lightweight titles whilst Walsall’s Chris Keane steps in with Nottingham’s Shane McPhilbin for the Midlands Cruiserweight title.

The show will be live and exclusive on BoxNation (Sky Ch. 437/Virgin Ch. 546).  Join at www.boxnation.com