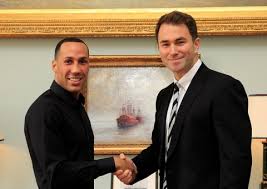 The announcement that 2008 Olympic Gold Middleweight Medalist James DeGale, 18-1 (12), had terminated his promotional agreement with Mick Hennessy of Hennessy Sports was quickly followed by the revelation that the Londoner had inked a deal with Matchroom Sport and had been handed a slot on the undercard of Carl Froch’s WBA and IBF Super middleweight title defence against George Groves.  DeGale takes on America’s Brandon Gonzales, 18-0-1 (10), in a final eliminator for the IBF title at Wembley Stadium on May 31st, the winner gets the winner of Froch-Groves.

DeGale’s switch helped Eddie Hearn to pretty much tie up the domestic 168lb division, it also means that the winner of Froch-Groves is likely to be pitched straight back in with a Matchroom fighter, assuming DeGale gets past Gonzales.  The cynical amongst us could see the signing of DeGale as an insurance policy to ensure that, should Groves beat Froch, Hearn still has a line on one or both titles and can entice “Saint” George with the carrot of a lucrative rematch against DeGale, who he beat by majority decision in May 2011.

“A little bit,” said Hearn when asked if covering all the angles had influenced his decision.  “But I’ve spoke to James a couple of times over the years.  We were quite close (to a deal) when he left [Frank] Warren [in 2012].  Then I saw his statement [on the 4th of April] saying he was a free agent, we met on the Monday and that was that.  The timing was perfect, the situation was perfect and we did it just like that.

“His position with the WBC and IBF means that the winner of his fight with Gonzales fights the winner of Froch-Groves, it couldn’t be more perfect.  James is buzzing, he gets to fight in front of 80,000 and gets the winner of the main event.”

Hennessy had guided DeGale to the cusp of a world title shot, “Chunky” was recently named as mandatory challenger to WBC titlist Sakio Bika.  Bika, though, has time on his side and the presence of Julio Cesar Chavez atop the WBC’s 168lb ratings is cause for concern.

For both Hearn and DeGale, Bika isn’t the most attractive or immediate of options, which is why the IBF route was explored and exploited instead.  He said: “It’s similar to [Leo] Santa Cruz [and Carl Frampton], the mandatory isn’t due so there’s no pressure on Bika.

“Why fight DeGale if you’re Bika?  There’s not the same money in it.  For James it means waiting until the end of the year, and it’s a tough fight as well, so all he has to do is beat Gonzales, which isn’t a given, and he gets to the world title.  Anything can happen in this game, so he’ll take Gonzales then see what happens.”

News of DeGale’s decision to terminate his contract and move on alerted a number of suitors.  Hearn led the charge here in the U.K. DiBella expressed interest Stateside, with other outfits trying to secure DeGale’s services even as he was negotiating with Hearn.

“To be honest, I sat down with James and his family on the Monday and he must have had six calls from promoters while we were talking, it was amazing,” he said.  “Lou was one of them, I spoke to Lou.  Because of his position, and the eliminator with Gonzales, people will look at the Froch-Groves situation and think: ‘I need a piece of that’, so James was a target for everyone.”

The 28-year-old southpaw has looked out of sorts in recent fights, he also looked disinterested in one or two interviews, which is a shame as, contrary to what you may have heard, he is one of the most approachable and talkative characters in the game.  DeGale has repeatedly and enthusiastically told people that “He’s back”, which is music to Hearn’s ears.

“James is misrepresented, in my opinion, as he’s great when you sit down with him,” he said.  “Some of the people in the office were unsure when we signed him, but we went to Wembley with him and they all said: ‘What a nice bloke’.  I’ve seen it in interviews, James is a buzz fighter who needs something to get excited about.  In recent performances, he’s looked flat.  His charisma’s been flat as well, he hasn’t been in the right environment to let it flow, but you’ll see that charisma flow at Wembley in May.”

Hennessy has not taken it lightly, though, vowing to take action against DeGale and whoever tries to sign him prior to the announcement that he had joined Matchroom.  Hennessy will take his case to either the Board, who cannot do anything as they do not have any real power when it comes to contract disputes, or to the courts.  Hearn told me that, as far as he’s concerned, the determination of the contract left him free to talk to the two-time ABA champion.

“The bottom-line is that nothing changes from our stance, we don’t talk to fighters who are under contract,” he insisted.  “We got an email from his lawyers saying he’s a free agent, met on the Monday then it was all done on the Monday.  Unfortunately, people are going to leave promoters.  If a promoter has got a case against a fighter then I’m sure he’ll sue him or come to an agreement, but James is a free agent and his contract was determined.”

A link-up had been on the cards when DeGale split with former promoter Frank Warren in 2012.  It is my understanding that the main stumbling block was DeGale’s valuation of his net worth, this was no longer a problem the second time around.

“Previously, yes, but now he’s at a level where it is easier to map out a future,” said Hearn when asked about their previous negotiations.  “If he beats Gonzales then he fights for a world title and is on a split of whatever we negotiate, so that’s good.

“Then, if he wins the world title, he owns the whole show, so it’s a case of timing—different things are important to different people.  Some promoters might pay bigger figures at certain times, some won’t, others might give more exposure, some less, but, as far as the whole package is concerned, I think we’re in a good position and James looked at that.  It’s all about Wembley, Froch-Groves and Box Office—James wants to be a Box Office fighter.”