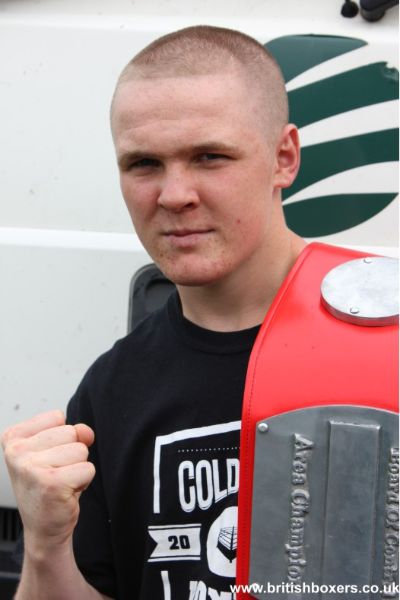 Former fighter Kieran Farrell unfortunately had to retire from  competing in the ring this year after suffering a brain injury in his fight for the English lightweight title in December 2012 against Anthony Crolla. Kieran at just 22, had to unfortunately accept his fate, but the boxing mad Farrell wont be leaving the sport he loves.
Kieran is currently in the process of opening a new gym in his local area of Darnhill in Manchester, where he will become a trainer and create an haven for the local youths on the estate where he lives and where he will look to develop the next generation of Kieran Farrell’s.
We are also pleased to announce that Kieran will be a regular boxing analyst for us and will be a great and welcome addition to our small team at BritishBoxers; With his passion and knowledge of the game we hope you will enjoy listening to Kieran’s expert predictions and fight reports over the coming month’s which will be a regularfeatured piece on our website.
You can follow Kieran on Twitter here: @VICIOUSFARRELL
Farrell Talks Big Fight Night in Belfast.
Carl Frampton vs. Kiko Martinez and Lee Selby vs. Martin Lindsay are two genuinely 50-50 fights. Frampton has the skills and can punch too – Kiko is a raw and a aggressive veteran. I’m picking Kiko in this one, he’s mixed in much better class and is really fired up for it. Also he’s upset the odds in Ireland before against Bernard Dunne.
Selby the reigning British champion has height, reach and punch power, where as Lindsey’s a bit shorter and doesn’t have a lot of power but is a solid fighter and technically sound. I’m going with Lindsey for this one. I feel he’ll work inside and beat Selby on points. Selby’s a big unit for 126lbs, he’s had some success at featherweight too. In my opinion he should move upto 130lbs an easier weight for him to make, where we’ll see the best of him.
It is also a great undercard in Belfast tonight, I’m looking forward to seeing Jamie Conlan, he is a fantastic fighter, he has the amateur pedigree he turned pro just after missing out on a place in the 2008 Olympic team. Jamie can go all the way as long as he believes in himself. I’ve watched him spar and also sparred him and he’s technically class and can punch a bit to the body too!
Unfortunately one of the fighters I was looking forward to seeing is a floater bout and more than likely wont get any TV coverage at all, but that’s Marco McCullough a former sparring partner who’s going to be a force in the featherweight division in the future. He is facing a former opponent of mine Ibrar Riyaz, although Riyaz is a journeyman he puts a bold effort up and gives any prospect a tough old time in there.
I also look forward to watching the progress of the next generation in the Smith family Callum Smith, he’s a former England team mate of mine and a really nice quiet lad.
I had actually booked flights to go over to Belfsat for the show, but I spoke to John Breen my former trainer and he agreed with my brother Nathan that for the sake of it to stay at home and watch the fights on TV Instead of coming for a mad 24 hours as it would of took a lot out of me.
They loved me over there in Belfast! I was nicknamed ‘Wee Man Vicious’ or as I like to be known ‘The Ardoyne Assassin’!
As for my progress with the new gym I have to wait for my friend to get the green light to remove the asbestos. it should of cost me £4000 but my friend Steven Delnon had a word with his boss and they’ll remove it free of charge as long as I have there logo on my banner!
With regards to the benefit nights that have been planned for me, Gary Doherty has been following my boxing career for a while now and he was devastated with the news. We also made a good friendship too and met up a few times at Belfast international airport for a brew. He’s been unbelievable. Noone asked him to do anything, he took it up on his self to contact fellow professional fighters and gym owners to organise fund raisers for me and men like Jamie Arthur and Derry Mathews accepted to do something and are working out of there skins just to put a fund raiser on for me, I really am grateful. You hear people say I met some good people in boxing but I can honestly say I have done and you see who really cares when something bad happens!
Dave Coldwell and his team at Coldwell boxing are putting together a benefit dinner at the Renascence Hotel in Manchester which will be a awesome night. Damien Harry one of Daves team has spoken to the Casino where my weigh in was for the Crolla fight and they want to put a poker night on too, which will be another wicked night.
To leave your opinions or contact Kieran follow him here on the Twitter @VICIOUSFARRELL