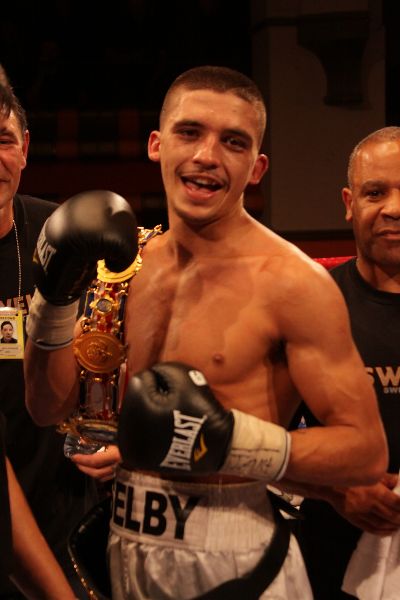 Lee Selby retained his British and Commonwealth featherweight titlesout-pointing Martin Lindsay over twelve rounds at the Odyssey Arena in Belfast on Saturday night; claiming a unanimous decision with scores of 118-110, 117-111, 118-109 on the judges cards.
The fight started with both boxers trying to claim centre ring, feeling each other out from behind their respected jab. Lindsay ended the opening session with a good left hook to just take it.
But from the second round onwards, it was Selby who began to produce the better work. The champion started to dig in hurtful hooks to the body, particularly a good left hook to the ribs that knocked the wind out of Lindsay.
But challenger soaked up the shots and fired back bravely. Selby was beginning to dictate the pace and by the half way mark was clearly ahead.
Lyndsay’s shots were just not making a dent in the bigger and physically looking stronger champion.Selby’s good movement and selection of shots were impressive and by the seventh round he had built up an healthy lead. Lindsay again shown he is made of tough stuff and shipped more and more of the champions leather but was not making a dent on the confident Selby.
At the start of the eighth the challenger caught Selby with some good shots of his own but the champion responded to take the round, although he was sent back to his corner with a good left hook and right hand. Going in to the ninth round was uncharted territory for Selby who had never been beyond eight rounds, but by this stage he was in control of the fight, but Lindsey was still pushing forward trying his best to turn the tide but Selby was always a step ahead.
After taking an early couple of combinations in the tenth, Selby responded and turned on the style againbacking Lindsey up to the ropes with a strong onslaught. Lindsay was now visibly taking to many stinging shots, bruised around the face, he was being hurt and bullied around the ring and Selby ended the round with a big left hook that knocked the gumshield from Lindsay mouth.
Courageously Lindsay made it to the eleventh, Selby stepped of the gas a little in this round but still did enough to win it and Lindsay credit to him made it through.
In the twelfth round Selby began to showboat and admire his work which wasn’t in good taste and the home fans made there disapproval heard and referee Marcus McDonnell warned Selby for his antics.Selby played the round out and looked comfortable in his work and looked a step above.
It will take a good fighter to rip them title belts from Selby, although he does get caught at times and Lindsay did have his moments, but his shots bounced off Selby, a bigger puncher might have a different plan in the future. But other than having to tighten up his defence a bit and lose the silly antics, which can be taken as disrespect to a fellow pro, Selby is a worthy champion and looks to be developing into a quality fighter who can reign for a longtime.
Apparently Selby has to shift big weight in the run up to a fight to get down to featherweight, but he didn’t show any signs of that bothering his fitness or performance and completed the championship distance with ease. If he stays at featherweight is the question and eventually he will probably move up, but for now he reigns supreme domestically and will hope to push on to bigger things this year.
Main event Carl Frampton knocked-out Kiko Martinez in the 9th round to claim the European featherweight title.
Undercard results from the Odyssey Arena in Belfast

Callum Smith stopped Tommy Tolan in round 1 at super middleweight