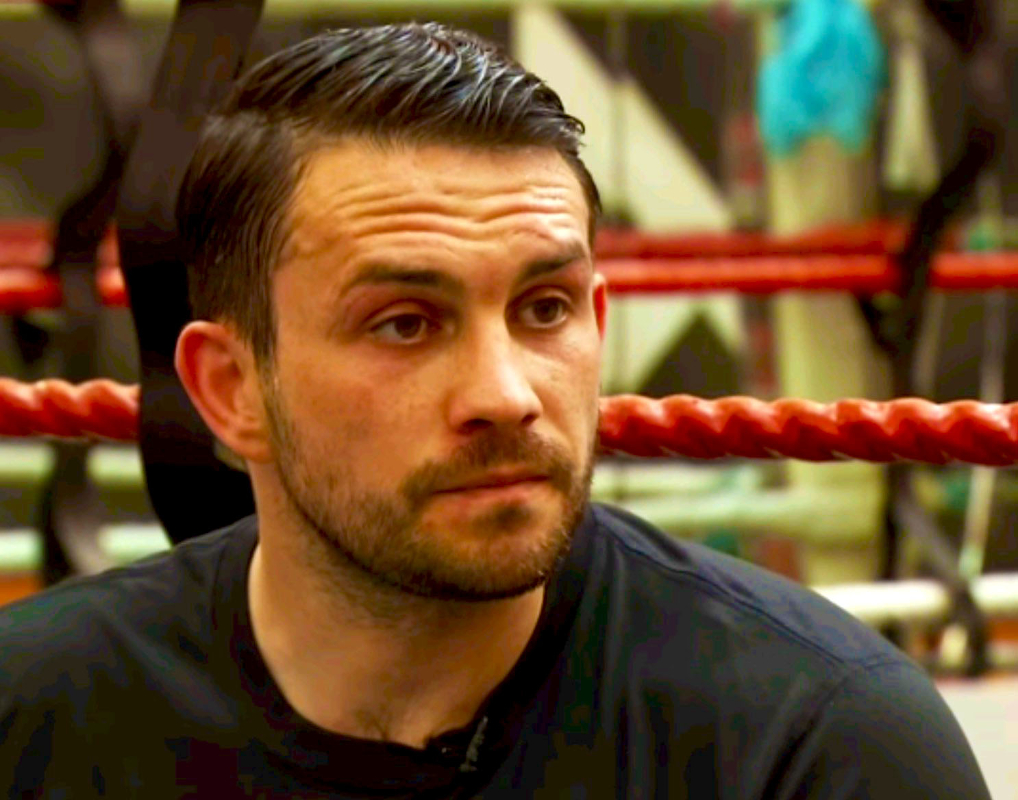 Paul Smith Jr. started boxing when he nine at the famous Rotunda amateur boxing club in his home town of Liverpool with Jimmy Albertina and Mick McAllister.

From a very young age Paul became hooked on boxing after watching the old fights with his Dad Paul senior who was a big fight fan. The ‘Fab Four’ Hagler, Leonard, Hearns and Duran and then Mike Tyson were the fighters that captured his imagination.

CLICK THE PLAY BUTTON ABOVE TO WATCH PART 1, PART 2 IS BELOW.

All he ever wanted to be was a boxer and when asked by his career tutors what his preferences were? There was only one box filled in with the word ‘Boxer’

His Mam Margaret on the other hand wasn’t too keen on the hurt game for her sons, but unfortunately as the years wore on, it became apparent that it wasn’t only broken furniture and ornaments that her boys were going to inflict on her, she would have the motherly task of bringing up four boys who all had inherited fighting blood and most probably from her genes.
Both parents have been a supportive rock for their pugilist sons, Mother keeps a low profile and pretends she doesn’t know much about what’s going on, her way maybe of blocking out what her not so little,ens’ anymore are doing. She is proud of her boys, but finds it hard to get her head around them boxing for a living, never the less she is the family foundation that the tough Smith’s are built upon.
[sam id=”1″ codes=”true”]
Dad Paul a former body builder and who taught his lads about body nutrition and conditioning from a young age, has been at his sons sides throughout their boxing journey amateur and pro. From ringside in Sports Halls and Working Men’s Clubs around Britain, to Olympic Stadiums, Eastern European halls, the glitz of America and every boxing abode in between, has taken every blow they have took like a dagger through the heart.
But Big Paul is a tough old Scouser from the old school and would never let his emotions effect his boys. He is their never empty energy source and their guardian angel, always there for that true hug of a victory or the comforting shoulder of defeat.
Stephen, Liam and Callum all followed big brother Paul into the Rotunda when they were old enough and what they all achieved as amateurs and since gone on and still going on to do as professional fighters is remarkable and unique.
All School boy champions, ABA champions, they represented England at the highest level, fighting around the world and between them boast Commonwealth Gold and Silver medals and a rake of National titles. As professionals they hold a combined record of 63-4 with 32KOs, along the way capturing English, British and Commonwealth titles with plenty more left to come. Paul is fighting for his old British light-middleweight title against old foe Tony Dodson in another big all Liverpool Derby fight this summer.

Liam, 24, the current Commonwealth light-middleweight title holder is on the verge of his own Lonsdale belt shot this year. Former British and Commonwealth featherweight champion Stephen, currently holds the WBO Inter-continental title and is primed for another crack at domestic honours this year. Callum the youngest of the boxing brethren at 22, has just turned pro on the back of his GB success and is tipped to go all the way.

Paul, 30, who adopted the ring name ‘Real Gone Kid’ and comes to the ring to the Deacon Blue Classic, a tune that is synonymous with him now, lead the boxing path for his brothers to trail blaze. After suffering the highs and lows in the sport; like losing by two points in the Commonwealth games final to future light-heavyweight world champion Jean Pascal, a silver medal is no mean feat, but Paul wanted the gold! As a professional his British title win against Tony Quigley in 2009, ranks top of his professional achievements, but losing that belt to James DeGale still haunts him and until he gets his hands on the British title again he will not settle.

On the back of his amateur pedigree ‘Smigga’ – the other name he is commonly known as) turned pro in April 2003, joining coach Billy Graham in Manchester at ‘The Preachers’ Phoenix Camp, where he would rub shoulders with then British champion and WBU champion Ricky Hatton who was on the brink of world boxing stardom.

Other Phoenix gym mates were Matthew, Ricky’s brother, Anthony Farnell, Matthew Macklin, Michael Gomez, Steve Foster Jr. and Stevie Bell amongst them, in what he describes in this interview (full interview video above) with BritishBoxers, as a gym with a family atmosphere and an ideal place to begin his paid career.

It was at the height of the great Manchester boxing revival of the 90’s and the young lad from up the M62 fitted in like a bandage fist into a new 8oz glove. Paul built up a great relationship with Billy Graham and the lads and still holds his old coach in high esteem. He had his first 14 pro fights with Billy before moving back to Liverpool to join one of his home city’s boxing family’s The Vaughan’s.

Under Georgie Vaughan and son Danny, Paul went onto claim the central area, the English, WBA International and then the British title. During this Halcyon period of his career Paul also was chosen to take part in the American based Contender Series, a TV program fronted by Sugar Ray Leonard. Paul won his one and only fight he had in the competition against David Banks, but had to leave the competition through injury.
After losing the British belt to James DeGale in December 2010, Paul decided it was time to shake things up, have a fresh start and he again decided to change camps, joining Joe Gallagher back in Manchester and ironically at the old Phoenix gym, which Gallagher had taken over at the time.
Under Gallagher, Paul re-built and after a couple of wins got a shot at his old Lonsdale belt against then champion George Groves. Paul was in good shape for the fight at Wembley Arena in November 2011, but after a good start to the fight, he was caught by a great shot from Groves that could be described as a freakish type shot. Groves seemed to have sent a right hook to Paul’s body but he ducked into it and it landed flush on his chin dropping him to the canvas. He was to get up and tried to fight on but the referee decided to jump in and stop Paul on his feet, ending his hopes of holding the Lonsdale belt he used to treasure for a second time.
Some might have thought that ‘The Real Gone Kid’ might call it a day after defeat to Groves, but far from it, his fire still burns deep and he is determined to re-claim the British title and then defend it so he can own it outright. In his next fight Paul again has that chance. He has earned himself the fight with Dodson and is in the right frame of mind and at 30 the physical prime of his 10 year career.
Paul, goes back to the beginning of his career, learn how he got into boxing and the successes he and his brothers have had. Paul speaks openly and candidly about the key fights of his career and in part one of our five part series, ‘Smigga’ recalls his amateur achievements, coming from a fighting family, his first title win as a professional and his inclusion in the Contender Series, plus much more.
PART 2: In the next part of the interview; Paul recalls his British title battles with fellow Scouser’s Tony Quigley and Tony Dodson and the fights with DeGale and Groves. He accepts that the defeat to Groves was just one of them things, but the loss to DeGale still weighs heavy on his mind and one day he hopes to get the chance to avenge it.