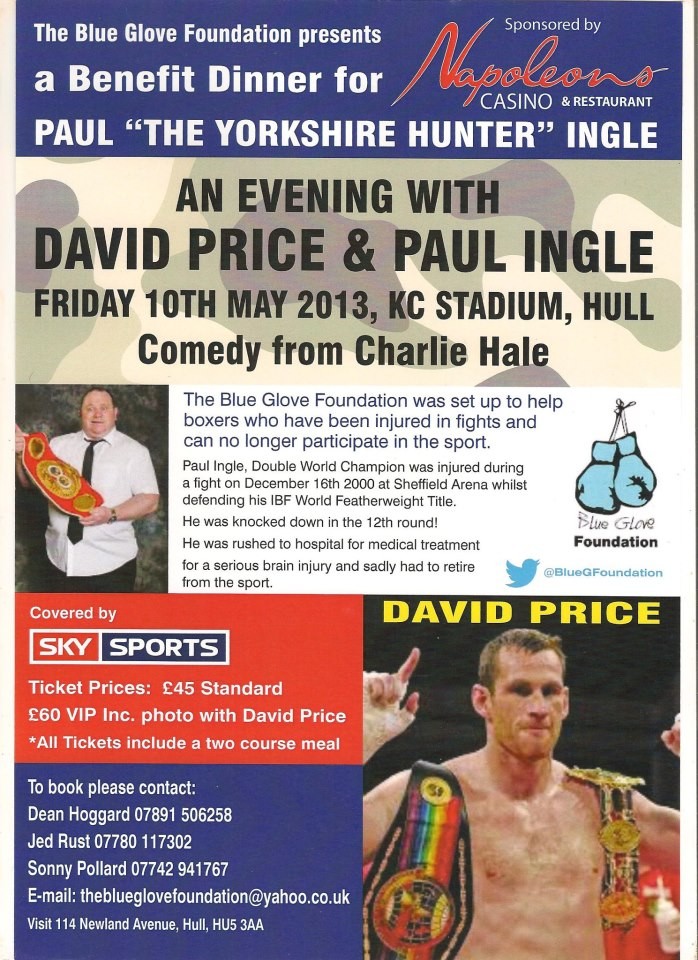 It will be 13 years this year that Paul ‘The Yorkshire Hunter’ Ingle the former two time world champion was injured during his fight against Mbulelo Botile in the second defence of his IBF Featherweight title on the 16th December 2000.
The Scarborough man entered the ring at the Sheffield Arena against his South African challenger in the form of his life and an established respected and real world champion. But it was all to end abruptly and sadly in tragic circumstances for Paul. He was knocked unconscious in the 12th round of a brutal contest.
Within an hour of the fight ending Paul was rushed to hospital, into theatre and being prepared for emergency brain surgery to save his life..
Robert Battersby, consultant neurosurgeon at the Royal Hallamshire Hospital carried out the hours of work to remove a blood clot from Paul‘s brain and took out the side of his skull, ending his boxing career but amazingly saving his life against all odds.

Paul was on the verge of the big money fights and unification battles with the worlds best, when his career was ended that faithful night in the steel City.  He had claimed the IBF title when he dethroned Manuel Madina in November 1999. His only loss before then had been to Naseem Hamed when he surrendered his WBO strap to the Prince.

Paul Ingle was a terrific fighter who would throw 100’s of punches a round and was a real fans favourite, a no nonsense get in there and fight guy, down to earth and a real working class hero from the east coast of England, and the sport as missed him ever since, but never forgot the excitement and intensity he would bring to every show not to mention the brilliant fans who idolised Paul.
Paul wins the IBF Featherweight title against Manuel Madina 1999
As a consequence of the brain damage suffered in his last fight against Botile, Paul now struggles financially and needs the help of the boxing community that he entertained and gave his all for, to come together and help one of it’s former warriors.
Former pro super-middleweight and friend, Sonny Pollard is hosting a benefit dinner show for Paul to help raise a few Bob towards his fund.  The show will take place on the 10th of May at the K.C stadium in Hull.
Ticket prices are £45 standard £60 V.I.P the night includes a two course meal comedy act Charlie Hale, charity auction, special guest speaker is British heavyweight champion David Price.
Sonny is the son of Paul’s former trainer Steve and after getting involved with the Blue Glove organisation this year he is committed to making the night a success for his longtime friend.
“Ive known Paul since 1993 when he turned professional with Panix Promotions and Frank Maloney, so I often trained alongside Paul and with my father being Paul’s trainer, we saw a lot of each other and became friends”. Sonny told BritishBoxers.
“In 1998 I turned pro myself and was in most of Paul’s training camp’s and boxed on the undercards on most of his championship fights.
“I became involved with the Blue Glove Foundation early this year after been approached by Dean Hoggard who had the idea of setting the foundation up. The foundation’s aims are to offer help to boxers injured in the ring by raising funds to help with medical bills and general living expenses”.
“We also aim to open a boxing gym in the future to promote the sport to young people and develop skills, fair play, teamwork and discipline.
The Blue Grove Foundation was set up to help boxers who have been injured in fights and can no longer participate in the sport.

Anyone who would like to attend the benefit dinner and support Paul or to make a contribution, please see the poster at the top of this article for details and contact information for the organisers and for tickets.

Thankyou for the memories Paul, true British boxing warrior if ever there was one!