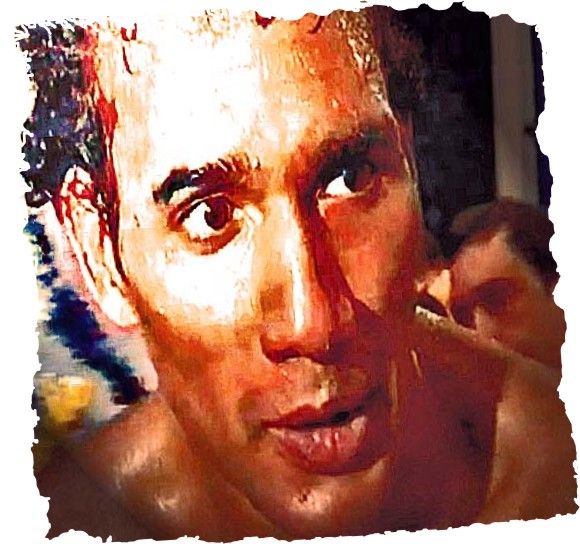 English cruiserweight champion China Clarke defends his belt against Matty Askin at the Winter Gardens in Blackpool on Saturday night on the undercard of Brian Rose v Joachim Alcine. For Clarke it is a fight he hopes will lead to a shot at the British title if he wins. For Askin it is a fight critical to his future in boxing.

Unbeaten in 11 fights, with 4 KOs and 1 draw, Clarke from Leeds, defeated London based prospect Wadi Camacho last month in the capital to claim the belt he puts on the line against Askin and will be doing it in his challenger home town of Blackpool.

But Clarke says he has no problem fighting in his opponents back yard and is used to the experience. “I like being a road warrior – I beat Wadi Camacho in Wembley and I beat Mitchell Balker in London as well. We’re all hungry in the cruiserweight division and I’m no different.” Clarke told SkySports.

Clarke, 34, walked away from boxing as young man but has been focused since returning 10 years ago but it wasn’t until 2009 that he turned over pro and Clarke believes he is now finally reaping the rewards for all his of his hard work. “It’s only because I’m improving that i’m in the game, and it shows me that if I can do this much in five years what can I do in another few?” he said.

“I’m a completely different fighter to when I came back to the sport again when I was 24. I’d lost that sharpness I had and it takes a long time to re-discover that, but it started coming naturally again about a year ago and now I’m combining skill with the aggression I used to have.

“I’ve stayed under the radar so I can develop my skills but I set myself a long term plan and I’m mentally ready now for what lies ahead. I knew it would take me a good six or seven years to starting earning what I want from the sport and it’s all part of the plan.

“This fight comes at the perfect time for me, to be honest a year ago it would have been too soon. His style should suit mine and anyone who comes along in the division I’m prepared to say ‘bring it on’

“There are no really easy fights at this weight so it’s a quick learning process and now I’m at that stage where I’m ready for these type of fights. “I’m honest about my own ability and I don’t want to look too far ahead, but obviously I’m English champion now and the British title is an obvious target.”

Askin, 24, has been motivating himself for the challenge, that he feels is critical to his future in the game, calling it a make or break fight for him: “It’s all or nothing for me, If I fail this time then it’s game over, I think it’ll be the end of my career, especially after the two other defeats.” read more from Askin here.

But the champion feels that Askin (14-2, 9KOs)  is just playing mind games and isn’t having any of it: “I can see why he’s doing it, he’s trying to encourage himself and it’s added motivation for him to win the fight, But I’m ready to send him into retirement if that’s what he wants! Clarke warned.

The fight will be shown live on SkySports.