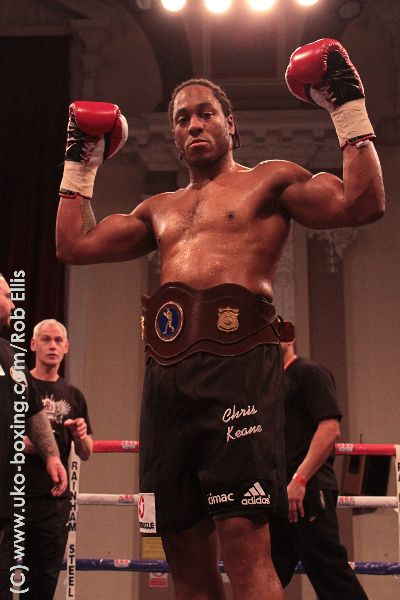 Chris is Keane on English title success after Sparring Cleverly

Chris Keane’s co-trainer, Dean Edwards, believes the Walsall boxer is more than ready for his shot at the English Cruiserweight Title following a week of sparring with WBO Light Heavyweight Champion, Nathan Cleverly.

On the same evening, current English Cruiserweight Champion, China Clarke, takes on Matty Askin in Blackpool with the winner due to face Keane after the British Boxing Board of Control made him mandatory challenger for the belt.

“To spar Nathan is invaluable experience for Chris,” Edwards told www.uko-boxing.com. “Nathan is world class and really pushes him.

“He tests his wits and ability and it’s great preparation for Chris’ English title challenge.

“We feel it should have been a mandatory British Title challenge but we’ll be ready to claim the English title. Chris is getting fitter, stronger and more experienced with every fight which is bad news for the rest of the British Cruiserweight Division.

It’s not just our team that rates Chris so highly though. Nathan really rates Chris and that’s why, out of anyone he could have chosen to spar for this fight, he asked for Chris. To hear that from somebody like Nathan is great.”

Keane (9-0) has a busy few weeks ahead of him as he looks to keep himself active ahead of his challenge for the English strap, which must take place by the end of July.

The former ABA Champion tops the bill on It’s-A-Bout-Boxing’s ‘New Blood’ show at the Institute in Digbeth, Birmingham, on Friday, 26th April before appearing on the undercard of Martin Gethin’s IBF Lightweight Final Eliminator clash with Ameth Diaz at Walsall Town Hall on Friday, 31st May.

Both fights will be against International opponents and Edwards believes that sparring somebody of Cleverly’s ability is the perfect preparation.

“This is a big year for Chris,” he added. “He blew away Shane McPhilbin (former British Champion) inside three rounds back in January and has two fights within a month of each other.

“The first is a ‘keep-busy’ fight but the second one, on the Gethin undercard, will be a bigger test for him.

“Nathan Cleverly has a phenomenal work rate and his ability is second-to-none. Chris had to be at the top of his game and Nathan really pushes him. That can only be a good thing as we look ahead to these two fights whilst keeping our eye on our assault on the English title.”

Tickets for Keane’s appearance on the undercard of Martin Gethin’s Final Eliminator with Panama’s Ameth Diaz are priced at £40 or £75 Ringside and are available from Walsall Town Hall Box Office on 0845 111 2900.