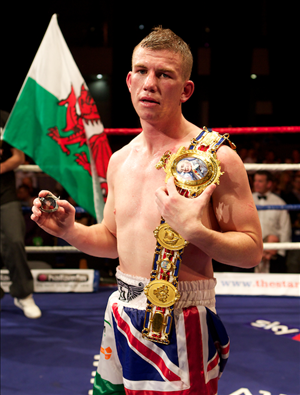 In recent years a number of boxers from the Principality have followed the examples of Welsh boxing greats such as Jimmy Wilde, Percy Jones and Howard Winstone by having success at world level.

Buckland, 26, believes his appearance on the undercard of Martin Murray’s mammoth clash with Sergio Martinez will put him on the path towards joining that illustrious list.

“I’ve seen Tony Bellew’s WBC silver belt on the TV and it looks something really special,” Buckland said. “A chance to win my own has given me more reason to train hard.

“If I beat Saucedo it will also put me in line for a world title shot either later this year or in early 2014.

“Joe Calzaghe, Nathan Cleverly and Gavin Rees have all won world titles for Wales in the last few years and I want to remembered with those kinds of names.”

Despite his hopes of winning global hours, Buckland insists he has no intention of giving up his British title just yet.

The British Boxing Board of Control (BBBofC) has ordered him to defend against Grennock’s tough John Simpson in a clash which gives the Welshman an opportunity to win the historic Lonsdale belt outright.

“When I first started boxing the aim was to be British champion and it’d be a dream come true to get it for keeps,” Buckland stated.

“We’re looking to move onto bigger things now, but I don’t want to vacant the title when I’m so close to winning it outright.

“If a world title fight doesn’t come straight away, I’d also like to win the European title and make a couple of defences.”