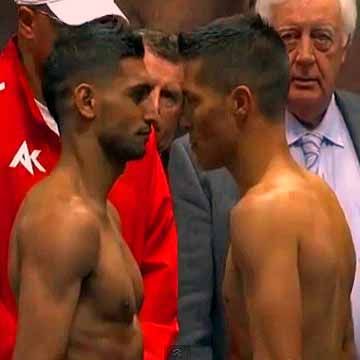 Amir Khan and Julio Diaz weighed in ahead of their catch weight contest tomorrow night at the Motorpoint Arena in Sheffield. – Bolton’s former world champion hit the scales at 10st, 2lb and 2oz, Diaz Diaz (40-7-1, 29KOs) came in 1lb more.

Khan, 26, continues his rebuild his career after successive defeats to Lamont Peterson and Danny Garcia and this will be his first fight back in the UK since win over Paul McCloskey in April 2011.

Former world champion Khan (27-3, 19KO) will also be looking for his second straight win under new coach Virgil Hunterl, his first was against unbeaten Carlos Molina (TKO10) last December. Khan has admitted that this could be his last fight in the UK, with plans for him to star in some big American showdowns if he gets through this test on Saturday.

iFilmLondon bring us the footage live from the weigh-in today, including undercard (below)