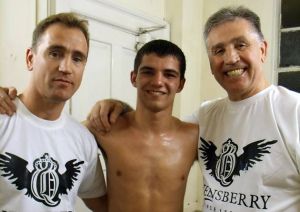 Vassell, 28 from Lancashire has an impressive unbeaten record of 20 wins and 10 knockouts. Nicknamed Achilles, he is also famed for being the half brother of former England striker Darius Vassell.

Opponent, 27 year Frankie Gavin from Birmingham won the Lonsdale belt from Junior Witter last November and can also boast an impressive unbeaten record of 15 wins with 11 coming by way of knockout. Nicknamed Fun Time Frankie, the Brummie was the first ever English amateur world champion and his performances in the ring have been living up to the hype outside the ring. Gavin will fight for the second time this year having stopped Jason Welborn in January but Vassell meanwhile will fight for the first time since he beat Ronnie Heffron on the undercard of Andrew Flintoff’s debut in Manchester last November.

Tickets are on sale now and likely to be a sell out with boxing fans watering at the mouth at the line up of talent featuring on the blockbuster show.

Ellesmere Port’s Paul Butler returns to London, bringing his all-action style to thrill fans when he challenges for the Vacant WBO Intercontinental Super-Flyweight title.  Butler, who holds the British title, won the Commonwealth belt last month at Wembley Arena with a devastating performance against Yaqub Kareem, stopping the champion inside five rounds.

Liverpool warriors Paul Smith and Tony Dodson meet again in a brutal rematch with the British Super-Middleweight title up for grabs.

Unbeaten London super-middleweight star Frank Buglioni features in an eight-round contest on the undercard as he targets his first title shot.  The hard-hitting 24-year-old made it six KO’s out of eight fights with his third round KO of Darren McKenna last time out at Wembley Arena.