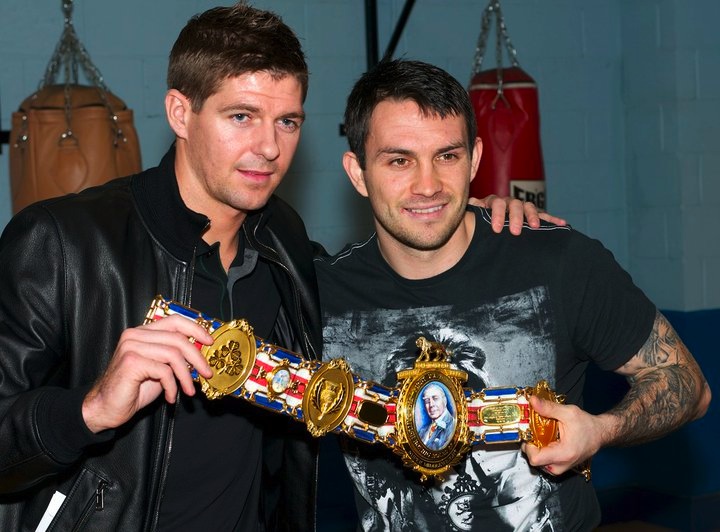 PAUL SMITH GETS HEAVYWEIGHT SUPPORT AHEAD OF ABRAHAM SHOWDOWN

Paul Smith faces the biggest night of his boxing career tomorrow when he challenges Arthur Abraham for the WBO World Super Middleweight title in Kiel, Germany live on Sky Sports – and the Liverpool star has received the support of some of British sports biggest names.

Former Welterweight World ruler Ricky Hatton has landed in Germany to lend his support to ‘Smigga’, while England and Manchester United captain Wayne Rooney has a private jet on standby to take him to the fight after United take on West Ham at Old Trafford.

It’s a massive day on Merseyside as Liverpool host Everton at lunchtime in the first Merseyside derby of the season, and while Reds skipper Steven Gerrard is focused on that crunch clash, he is backing Smith to bring the belt home.

“I support and follow all of our local fighters, whether it be any of the Smith brothers, Rocky Fielding, Tony Bellew, just to name a few,” Gerrard told the Liverpool Echo.

“I love watching and seeing the local lads do well. The hard work, sacrifice and dedication the lads put in is incredible. They deserve all the credit they get.

“This weekend we see Paul Smith go in for the biggest fight of his career and I wish him all the best. It’s a tough fight for him but I know how much he wants this. If he performs to his max, I’m sure he can bring that belt back home”.

Smith has taken a legion of fans to Germany for the big night and, along with the likes of Gerrard, Rooney and Hatton, the 31 year old is humbled by the support he has out there ahead of the clash.

“It means a hell of a lot to see the support that is coming over to back me,” said Smith. “It is so humbling to see that people will pay their hard-earned money to come and watch me fight. Times are hard, I am not playing the violin that is just how it is, people have better things to do than pay for a flight, hotel, ticket, spending money when they are over here just to watch me and support me but they are doing it and they are doing it in their hundreds. That is something I am really grateful for and something I can only try my best to repay by winning this belt but I will give everything I have got.”