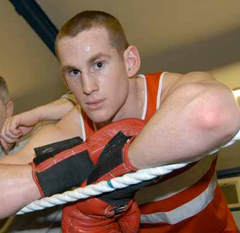 David Price has returned from his Canadian training camp and is convinced he’s back on track to become world heavyweight champion.

Price believes he’s  bang on course to get revenge over Tony Thompson when they clash in a return 12 rounder at Liverpool’s Echo Arena on Saturday July 6.

The veteran Washington DC southpaw stunned the boxing world when he KO’d Price in two rounds in February.

Price who is now training again in familiar surroundings at Salisbury ABC in his home city  said: “I’m learning all the time from Lennox.

“Courtney is pushing me beyond what I thought I was capable of and I’m preparing for the fight of my life.

“I’m ready to win it and get right back in the mix.”

Lewis will fly into Britain for the final ten days ahead of the big fight that will be screened live on BoxNation.

Price’s promoter Frank Maloney added: “David’s confidence is soaring and I am confident he will redeem himself.”

A second title fight will be announced later this week with further undercard news.