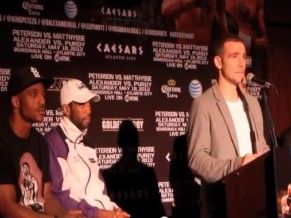 The boxers and their teams give the customary pre fight views at the final presser, before Saturday nights big fight show in Atlantic City. There is a great night of boxing ahead at the Boardwalk Hall. Britain’s Lee Purdy is looking to cause a massive upset State side after stepping in at the last minute to take on IBF world champion Devon Alexander.

The fight is the co main feature with IBF light-welterweight Champion Lamont Peterson going up against big punching WBC Interim Super Lightweight Champion Lucas Matthysse from Argentina, in a 12-round catch-weight contest.

Purdy took this world title chance after the withdrawal of stablemate Kell Brook and is ready to make the most of it and dethrone Alexander. And the Colchester fighter was quick to warn Alexander  at the press conference, that he doesn’t intend to let the him try his spoiling tactics and that if he does he will not stop punching until Alexander lets go!

“I’m a big underdog in a lot of peoples’ eyes. I’m here to fight and put on a good show for the fans, they are paying their hard earned money for entertainment and they don’t want to see fighters holding for 12 rounds. This is a fight that I’ve wanted. I’m coming to bring the upset.”

“Alexander holds a lot and I’ve come all this way to fight, and if we have a decent match and he doesn’t allow the holding it’ll be a good fight. When he gets close to me of course he’s going to hold but, my strength, I’m not going to stop punching him until he lets go. When Alexander and I enter the ring, it really doesn’t matter where we are, It just matters that we’re both in it to fight.” said Purdy.

The champion though in fight mood was forthright in how he sees the fight going and after his fight against Brook being postponed three times, he is just happy to be back in the ring and warns Purdy, he’s a man in the wrong place at the wrong time!

“Finally’ is the key word here. My fight with Kell Brook was postponed three times. I was supposed to fight him many times, but now I’m fighting Lee Purdy who’s a very suitable opponent for me. I’m ready. It doesn’t matter what Lee Purdy is going to bring Saturday night. He’s in the wrong place at the wrong time. I’m ready to fight.” said Alexander.

On the undercard Anthony Ogogo and Haroon Khan both have there second professional fights.