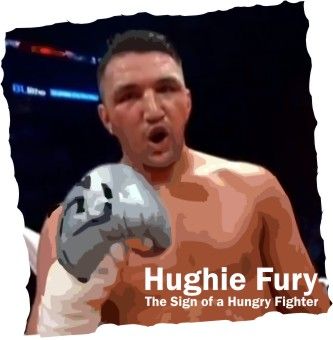 4 fights in 4 different countries would normally sound like the schedule of a journeyman taking whatever fights he can on the road, but in this case it’s a reference to the initial stages of a prospect’s career. Ever since Hughie Fury made his professional debut in March of this year, the statement of intent with regards to his development is clear. Learning fights are being sought after and Team Fury are willing to get them whenever and wherever they can.

In his latest outing, Hughie boxed in Romania against Janos Finfera, a very game opponent with an extensive K1 background who persisted in trying to close the distance and fight up close and personal. This suited Hughie, who was looking to use his jab from the outset to setup stern right hands behind it. Getting hit cleanly didn’t deter Finfera and his inclination to keep coming forward allowed Hughie to showcase what seems to be very solid power for his age. It wasn’t long before Hughie started backing up his man with hard shots, and as soon as it became apparent that Finfer was hurt after taking a few shots to the body, Hughie was relentless in landing more body shots until the referee stepped in to issue a standing 8 count. The bell to signal the end of the round saved Finfer from further punishment, allowing him some time to recover and regroup.

Rather than going into a defensive shell, the commencement of round 2 saw Finfer charging forward and throwing shots in a brave attempt to make a fight of it. Nevertheless, his aggression was met not only by Hughie’s strength on the inside, but also his willingness and ability to land short hooks and uppercuts. It wasn’t long before Hughie was backing Finfer up again, paving the way for him to continue where he left off in working the body. After forcing another standing 8 count with a body shot, Hughie followed it up soon after with a few more right hands to the ribs before Finfer went down. After the referee called a halt to the contest, Finfer received medical attention and was taken to hospital with a suspected rib injury.

In his previous fight, we saw Hughie controlling a fight and getting rounds under his belt vs an elusive opponent in Moses Matovu, so it was good to see something very different this time around and the manner of the stoppage was a pleasant surprise. Taller fights generally don’t like in-fighting given that they have to bring their punchers up and have tighter angles to work with than shorter opponents, but Hughie showed some excellent work on the inside and looked comfortable finding the right range to deliver round punches. Furthermore, Hughie knew when to circle and lean on his opponent in order to dictate that the fight on the inside was on his terms. Hughie showed good awareness and sound fundamentals which will serve him well later in his career against higher calibre opponents that will try to rough him up on the inside.

Next up for Hughie is a trip to Ireland on June 8th where he mets Sandor Balogh, a durable opponent renowned for going the distance. Hughie will likely be outweighed on the day and finds himself against another opponent who likes to do much of his work on the inside. Whether Hughie will be content to box and dictate pace, or if he will aim to break down the tough Hungarian remains to be seen. Whatever the type of fight, it will be another lesson crammed into a short space of time for Hughie before yet another bout scheduled for June 15th on the Sam Sexton undercard in Norwich, England. If all goes to plan, Hughie will have had 6 fights within his first 3 months as a pro. Remarkable activity indeed and the sign of a hungry fighter who, despite being aged just 18, is showing a level of dedication and burgeoning potential which already makes his journey as a professional a compelling one to follow.