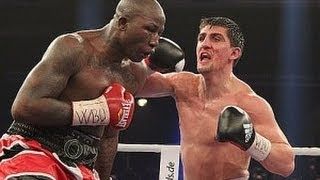 Afolabi Comes up Short Against Huck

Ola Afolabi failed in his bid to take the WBO cruiserweight title off Marco Huck on Saturday night, with the champion retaining his title with a majority decision over the Brit. at the Max-Schmeling-Hallewith in Germany.

Judges final scores were: 115-113 and 117-111, for Huck, but the other official’s card had it level 114-114, which looked generous for the Londoner. Although Afolabi had his moments, and as in the first two meetings, his style does trouble the German champion, Huck had clearly done enough in this third meeting between these two rivals.

Afolabi first challenged Huck in 2009, losing a close unanimous decision. The pair then produced a classic dust-up in May 2012 that ended in a draw, which in turn promted this rubber match. Afolabi who now lives and trains in LA has promises though that he will return.

“We tried but we came up short again.” said Afolabi after the fight.

“Thanks for all the support, I’ll be back, that you can count on. I may have lost this fight but I’m winning in life.”

Huck, who has now made 11 successful world title defences of the title he took off Victor Emilio Ramirez in 2009, added: “I think I surpassed myself today, I showed that I can box and the Key to the success was my good preparation. I leave the ring today without a bad conscience.”

To Watch the Full Fight Video, Continue to the Next Page..