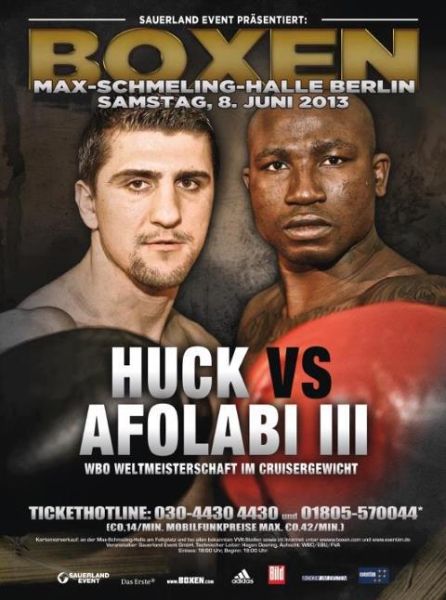 Can Afolabi Find the Kryptonite to defeat Captain Huck in Rubber Match?

Afolabi and Huck’s rivalry goes back to December 2009, when the Serbian-born Berlin resident narrowly out-pointed the LA based Londoner in Germany. The pairs second meeting last year (May 2012) again in Germany ended in a controversial but competitive draw, with many believing Afolabi should have took the points decision and with it Hucks belt.

The previous two bouts have inspired a fiery atmosphere during the build-up for their rubber match, which promises to be just has fiery in the ring and hopefully this fight will finally decide this cruiserweight saga, but hey don’t rule out a 4th.

The Fight can be seen LIVE and EXCLUSIVE on BoxNation.
Coverage starts on the night at 7.30pm in Germany.

In a pre-fight press conference the Serbian-born, German-based champion declared his belief that he thought he won both the first and second meetings between the two. Afolabi responded, saying that Huck wasn’t a deserving world champion and that he lost to Lebedev, himself and Firat Arslan.

The stage is now set for the two to finally settle the score once and for all as hometown favourite Huck looks to stage an 11th defence of his WBO crown spanning three-and-a-half-years.

BoxNation will also be screening LIVE from California, USA from 3am Sunday, Marcos Maidana v Josesito Lopez for the WBA Intercontinental Welterweight title.

Continue to the next page for more on Ola Afolabi’s world title challenge against Marco Huck including press conference video and the fantastic final round of their last fight.