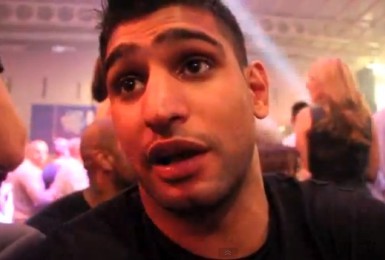 Back home, Amir Khan was at the Bolton Arena on Saturday night to support his Bolton gym mates Paul Smith, Anthony Crolla and Scott Quigg who were involved in big fights. The former light-welterweight world champion spoke to Kugan Cassius for iFilmLondon about the rumors of a fight with Devon Alexander in Dubai.

Khan also doesn’t rule out a fight being made against dangerous Argentinian Lucas Matthysse should a match-up with Alexander not happen.

The Bolton boxer also speaks about his British rival Kell Brook, the past arguments and the possibility of a meeting between the two British rivals.